So first off, I initially wanted to get a hanging hitch rack because 1) my friend has a nice Yakima 4-bike hanging one and 2) I could also use it as a maintenance stand (which I've also been shopping for).

But after reading tons of posts here and on the Internet and looking at YouTube, I decided a platform rack would be better for my eBike and especially other bikes that may not have a proper top tube.

So I thought I was set on getting the Yakima HoldUp. It had good reviews on eTrailer.com, could be expanded to a 4-bike carrier, had integrated locks and was on the lower price end of the platform bike spectrum. The regular one is $400 but I think the EVO version which is sturdier is $550.

I was hoping to get buy a used one and the cheapest I could find it for on Craigslist was $350 and that was just for the 2-bike. The 2-bike add on is another $400 new.

So then I moved over to the Hollywood Rack 1400 model. I could actually buy it for $450 new in box from Craigslist and that included the 2-bike add on.

But then I started thinking about how heavy and big the platform racks were and how I wouldn't keep it on my vehicle all the time like my buddy does so I wanted something that was easier to take on and off. And... I wanted to find one that was in-stock now, that I could go pick-up in person and if need be... return it if it didn't work out... I could return it. Something I couldn't do on Craigslist.

So after more YouTubing and seeing them around Craiglist, I ended getting this Allen 4-bike hanging rack from Walmart: 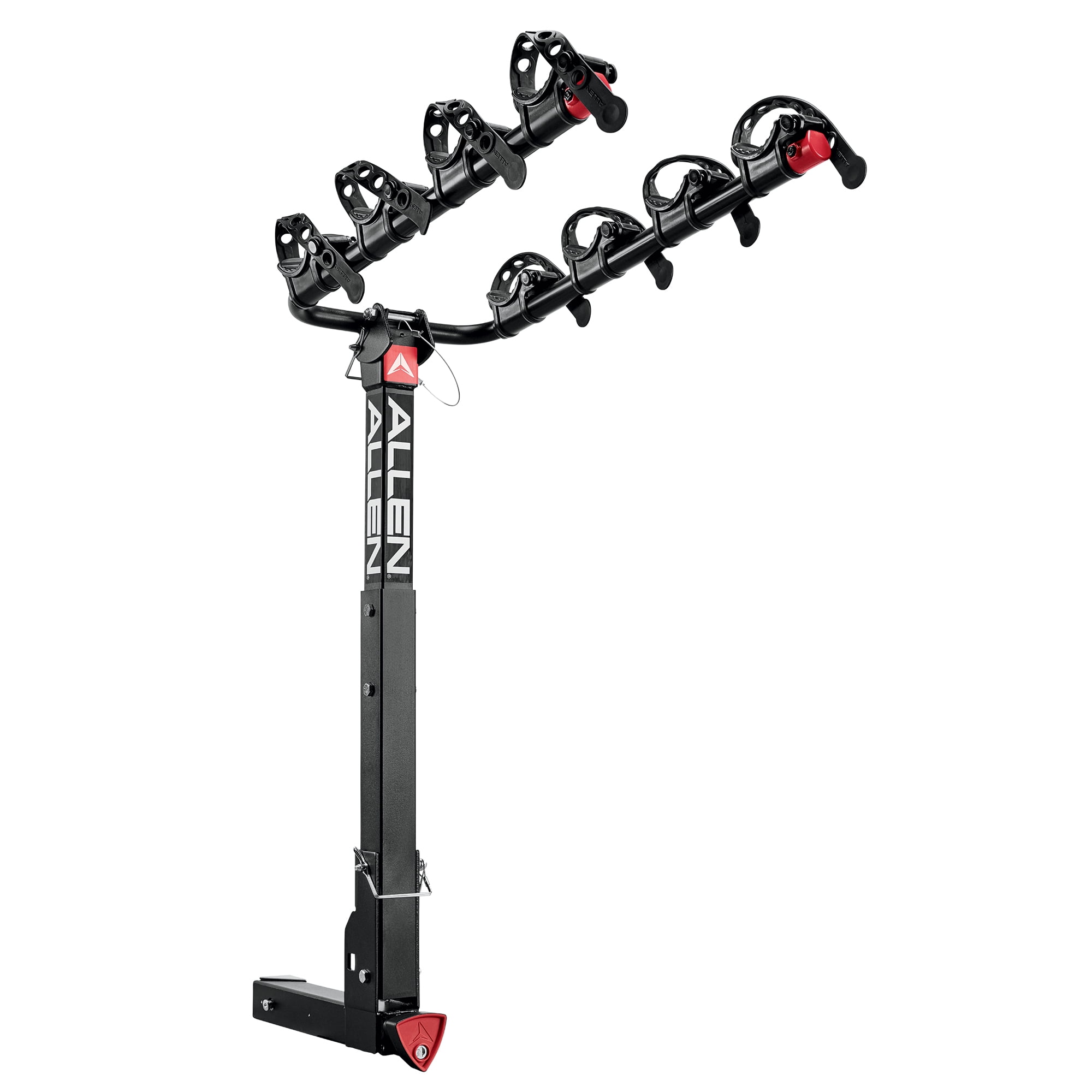 It was really simple to install and put together... actually to make it easier, I put the bottom bracket into the hitch first and then assembled it while on the hitch (only had to screw in the lower part and 2 screws on the upper part with the rack). The videos on YouTube helped sell me on it.

Putting it in the hitch was really easy... although there is a concern about how secure it is. It doesn't use a hitch pin that goes all the way through the rack but more a hitch spring stop and then a screw tightening wedge system that prevents wobble: Once on and tightened, it seems pretty stable so we will see how this goes with time.

It also supports tilt for the rack so you can open the back of your vehicle but I wouldn't suggest doing this while the rack is loaded.

Putting the bike on the rack was easy if you have used racks before... just load on the top tube and lock the straps. The straps is something I debated on. The older models used the velcro type straps and my trunk mounted track also used that type but my friend's Yakima used the rubber type locking straps and this one also uses those same rubber type ones. They say those degrade over time but they are easier to use and you can replace them.

You can also put a step through type bike using a top tube adaptor or as seen in videos, using the seat post and the down tube.

At least I can do simple things like cleaning and chain lubrication while on the rack and removing it from the hitch is quick and painless because the rack is small and about 26 pounds.

I've only transported my ebike once and it seems to be okay but I'll report back after more usage. It hold my regular bikes just fine so at least I can use it for that. Maybe I'll buy the Hollywood bike rack later.

I wouldn’t carry a step thru on hanging racks. The adapter would have to support more weight than they are designed for.
You must log in or register to reply here.

Rack plateform for civic and more