Average Cruising Speed on your e-bike

fooferdoggie said:
I think its just under 20 but not positive I only get a few more miles going 22 even when I work harder but I think thats because with the mid drive the harder I push the more the motor works.
Click to expand...

As you are very aware, it depends on wind, weight, surface, and slope, as well as speed. Nothing is simple, but more speed eats more battery charge in a very nonlinear way. So 15mph to 20mph seems pretty reasonable.

Art Deco said:
As you are very aware, it depends on wind, weight, surface, and slope, as well as speed. Nothing is simple, but more speed eats more battery charge in a very nonlinear way. So 15mph to 20mph seems pretty reasonable.
Click to expand...

yep. my watts I put out vary constantly. averages are tough my heart rate drops so much at each stop then takes a bit to get back up.

Two recent rides on my class 3:

This was on a recent vacation, in a beach area that was absolutely dead flat (95ft over 14 miles). 21mph average. My recollection is it was a decent headwind going out, and you can see speed picked up coming back. I'll note that I had road tires on the bike for this (usually run gravel tires).

A more typical ride. This route is ~65-70% unpaved (gravel or dirt). Much hillier, 3000ft of elevation over 45 miles. Riding knobby gravel tires at a lower pressure. Average speed is 16.6mph, which is on the high side for this sort of ride but I was riding after work and went further than planned and pushed hard to get home before the sun set. 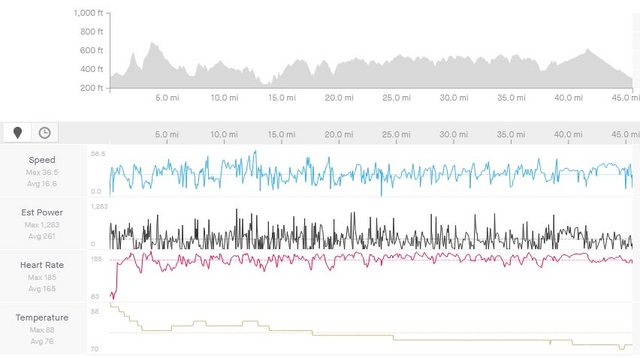 Both rides would be almost entirely in eco (the lowest assist setting). I occasionally bump up a level or two if I'm on a busy road.
T

billmeek said:
In large part it will depend on the bike and it's gearing. I have a Sondors MXS that with my out of shape body can sustain 27MPH with power assist level all the way up without great effort, but I have to pedal quick or else I'm just "ghost pedaling" with the motor doing all the work which will eat batteries. The MXS is a 14-28 freewheel and really needs a larger range for higher speed riding. I have an LX on order with a 12-34 tooth cassette that should be easier to maintain that same speed.
Click to expand...

I put a 52 tooth sprocket up front. Worked great.
B

I have one of these in-hand to install:

Just waiting on the tool needed to replace the freewheel... and the time to get it done.
K

This is an old thread but I have some recent data. I was sitting on a picnic table 7.5 miles from home with 480' of climbing when the phone made the defcon 1 weather warning giving me just 20 minutes to beat it. I have a high windage fat bike with big 52 volt batteries with BBSHD drive. For the first time ever I put the setting at level 9 max and headed for home. There are 11 stop signs between the picnic table and home.
I averaged 27.2 mph while seeing 28-30 except on the steepest climbs. There was essentially no head wind. My power usage for those 7.5 miles was 38 watt hours per mile or 285 watt hours. That translates to pulling 1,034 battery watts average on my ride. I made it in 17 minutes. The report was accurate, I had about three minutes to spare. My range at those speeds if I did not overheat the motor would be only 53 miles. Me and the bike plus the dog was around 300 lb.

My commute is 18 miles one way and with my dual motor setup (front geared hub and rear direct drive), I average 18-19 mph in eco mode.
I carry a lot of gear on my electric cargo so sometimes I'm running it at 210 watts on the flats, other times at 400 watts when I'm climbing steep hills. It takes me a little over 1 hr but its a lot fun. For commuting, I prefer my hub drive bikes over my mid-drives because it doesn't interfere when I'm changing gears. With my setup, I can run a 6ah battery in the front and a 17 ah battery in the rear. 90% of the time only the rear is running and the front kicks in on the hills when needed (i.e. speeds goes down).

One thing I don't like about mid-drives is that if your in the wrong gear and you throttle from a stop, you will bog down the motor. With my hub drives, I don't have that problem and can easily take off from a stop in any gear.

I also ride a regular road bike and on my smart trainer. On non electric bikes, I average around 16.5 mph PedalUma said:
We have a hands on science museum in the SF area. Here is a calculation tool from their site.

Thanks for sharing that, I’ve been curious about drag depending on what speed I hold for my commute. It’s a super flat 10 mile commute so can pick my speed and just roll. 20 mph usually feels right. I have an upright position so know I’m. Or very aerodynamic but it’s comfortable.

speed causes noise from air and that can damage your ears long term. whe nI am doing 25 or so man the wind in your ears are bad

WilliamT said:
One thing I don't like about mid-drives is that if your in the wrong gear and you throttle from a stop, you will bog down the motor. With my hub drives, I don't have that problem and can easily take off from a stop in any gear.
Click to expand...

The wear/tear issue is something I brought up above, but I didn't mention I solved it, although its an extreme solution in terms of the builder really needs to have their act together to make it happen and do the job right.

A dual motor setup. PAS is enabled on both motors, the geared front hub is set to enable PAS as quickly as possible, albeit in slow-start mode as thats best for the frame, safety etc. The mid in the back has its settings changed around so it starts off in PAS very gently and later than the front motor. Crossing an intersection from a dead stop, the front motor kicks in at about 1/5 pedal turn, and the rear about halfway thru the intersection. Getting the bike rolling rather than trying to start with a mid from a standing stop eliminates the shock to the drivetrain. On the first bike I did it on - used as a quasi cargo bike on table-flat terrain at that time - I left the bike permanently in its 11T rear cog, which lasted right up to 1000 miles before it cracked. On my second - an actual dedicated cargo bike (a Bullitt) - I'm right at around 1300 miles with no wear on anything, but I geared that bike to be happy at about 3 cogs up.

That first bike just got moved to the coast where it is always a couple cogs up from the bottom. Better chain line and that too eliminates the need to shift, as having a reasonably big cog in the bag commanding the startup eliminates the shifting issue. And now, the front motor is doing serious work helping to pull the bike up steep hills, which doesn't make me go faster, but helps me maintain my speed instead of slowing. I found I can hold 23-24 mph which is amazing in that terrain, and since speed limit is only 30 I'm actually in a really good position safetywise.

Either way, 2wd if you are up for the challenge and build it right has many benefits.

Here are my numbers from the last ten rides. It reflects the fact that I use my eBike for daily commuting. It is set as a class 3 eBike.

WilliamT said:
One thing I don't like about mid-drives is that if your in the wrong gear and you throttle from a stop, you will bog down the motor. With my hub drives, I don't have that problem and can easily take off from a stop in any gear.
Click to expand...

That is why high-end bikes are moving toward mid-drives with internal gears in the rear hub. They can get a belt or with a chain, the chain line is always straight. But more importantly you can shift when stopped from the highest gear to the lowest. None of the high-end bikes have throttles because the 'throttle' is in your foot. They all have torque sensors.

PedalUma said:
But more importantly you can shift when stopped from the highest gear to the lowest.
Click to expand...

You can shift while stationary with any mid-drive and derailleur. While standing on the ground, push a Shimano down-shifter for three clicks, lift the rear of your e-bike with the right hand and push the Walk Mode button... You can get the whole way down to the granny gear with that technique.

It is easier to predict your actions and just downshift before any planned stop though.

Get the class 3! I cruised along at an avg speed of 22mph last night and enjoyed every "bug in the teeth" minute of it.
If I was commuting that distance I wouldn't even think twice about it!

ruffruff said:
Get the class 3! I cruised along at an avg speed of 22mph last night and enjoyed every "bug in the teeth" minute of it.
If I was commuting that distance I wouldn't even think twice about it!
Click to expand...

For how many miles?

Stefan Mikes said:
For how many miles?
Click to expand...

I thought so. You wouldn't be riding so fast if you were to ride for 50-60 miles on a single battery

Stefan Mikes said:
I thought so. You wouldn't be riding so fast if you were to ride for 50-60 miles on a single battery
Click to expand...

Doable unless there's significant headwind. Also, two full recharges of the battery a day would cost the OP a lot of money for a new battery quite soon.

Yes, but less expensive than the alternatives. Think of it as a productive tool such a contractor's electric nail gun.
You must log in or register to reply here.

Throttle or no throttle. That is the question
4 5 6