Bought a G06.350.36 geared rear motor last winter from China. It has a 175mm axle for fatbikes. Weighs in at 12 pounds with rim. Came with a tiny 36 volt controller and KT-LCD3 display. I foolishly thought I could have it running by Xmas, but who wants to work in a cold garage.

Here it is in get-it-on-the-road running condition. 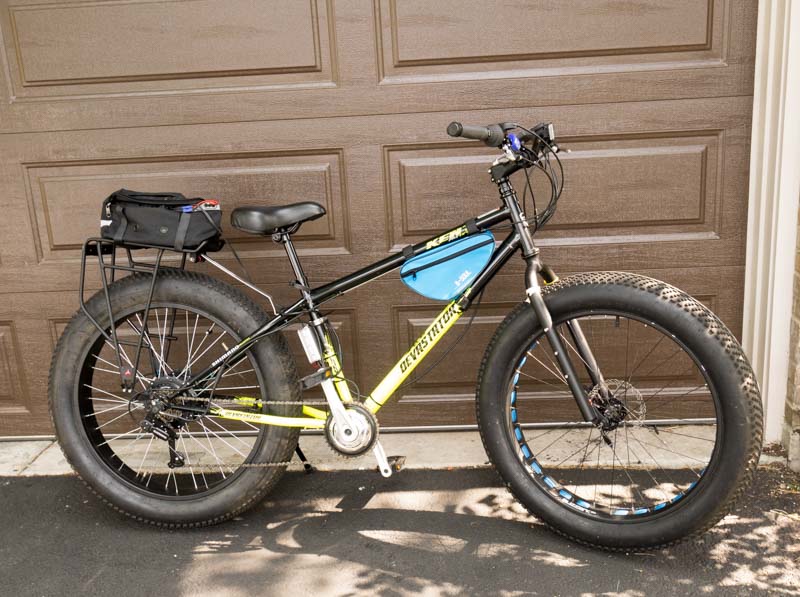 I learned a lot about bike building with this project. The donor is an inexpensive Kent fatbike ($99) with non-working v-brakes. I replaced the heavy steel front fork with a cr-moly one that supported disks. Installed a new headset, stem, and bars. Then I had to buy a new wheel compatible with disks. I replaced the crank when I saw the arms were steel. It also had 34 teeth instead of 32.

The wheel has those cool cutouts? I didn't know people used PVC rim strips for strength. Color is secondary. I used the old rubber srips and my first tube exploded thru the cutout. Also found I had 8 pounds worth of rubber on each wheel. Have some lighter tires coming.

As far as running, the motor seems strong. With my 36 volt batter, I can get to 21mph (indicated) on throttle or pedal. I accidentally attached my 48 volt battery w/o thinking and the controller powers up, but I know the controller only has 50 volt caps. I do have a 48 volt controller which should work.

@harryS Very nice! I think I will buy a Kent fatbike to swap all my Radrover stuff to when I install the BBSHD on it next week. Great build!

I recommend buying a better bike. The Kent is cheap and heavy, and the v-brakes don't work. Makes for some headaches adapting for disks. The two crank arms weigh about 3 pounds. Two tires and tubes are 15+ pounds. The stem is steel, not alloy, and I bet it weighs a pound.

@harryS Yeah, after some research I went with a Mongoose Malus fatbike. Less than $250 shipped, but has 7 speed and disc brakes.

For summer use, I rode the bike with Vee Rubber Speedster tires, which are smooth thread, basically slicks with grooves that were very quiet and easy rolling. Easier to pedal too.

On a whim, I added a front derailleur and three speed crank. This was silly.. Functionally, a motorized fat bike doesn't need the extra low gearing, but it did get me into a 44T big gear, which is better for higher speed PAS riding. Used a Shimano side mount derailleur with an Origin 8 extender bracket. The bracket was still 1/4" too short, so I made it longer. The action is very nice with a Shimano ML-310 shifter. 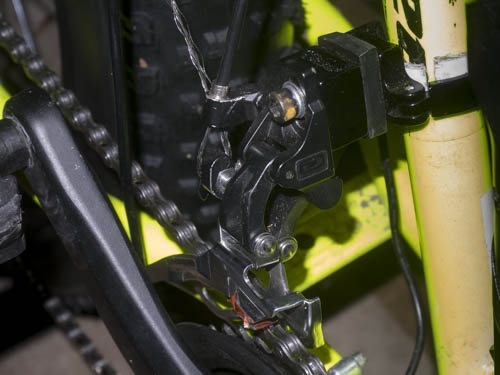 I also switched the controller to the Luna 25A hot rod controller for the Sondors fatbike, as it uses the same motor. It doesn't use the same front wire harness though, so I had to redo the throttle , and also lengthen the brake and display wires. Then I put on Vee Rubber Snowshoes for winter. They are quite noisy. 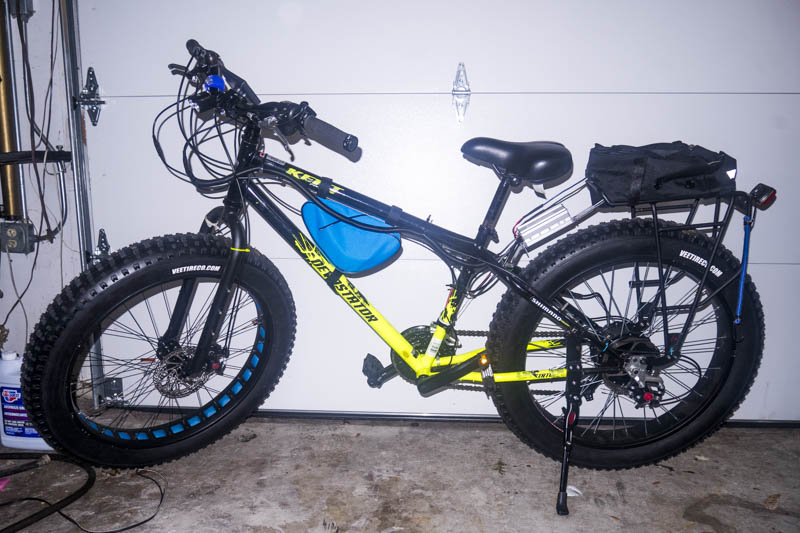 Moved the controller to the rear rack. I keep a battery in the bag. The controller will take 24 to 52 volts. I have run anything that will fit in the bag. Performance at 52 V is very good. I can attain 28 mph, as promised by Luna.

The original goal on the bike was 2 wheel drive. Last year, I purchased a 500W geared rear motor kit off ebay for $189 with a 26" rim, plus controller, PAS, brake levers, etc. It's spaced for a standard bike at 135mm, which is the same as the front wheel of the fatbike. I took off the rim and laced it into a 4" fatbike rim. The wheel, motor, and tires weigh 17 pounds!

I mounted it last week. I originally used a small 36V 14A controller and a separate 36V battery. By itself, it would only push the bike at about 12 mph. So I used the 22A controller that came with the motor. I also mounted a 36V Dolphin on the down tube. I only used a throttle for the front motor. I may hook up the PAS later. 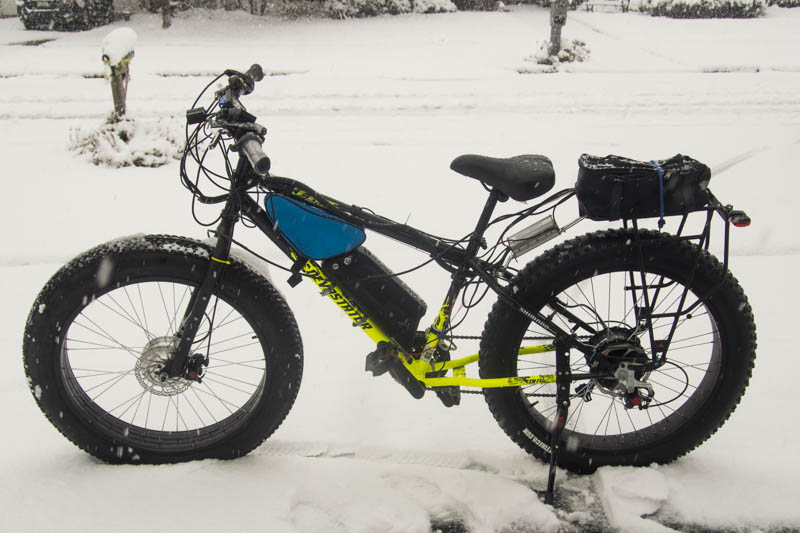 So here it is on its maiden snow run. I've stuffed the second controller into the blue bag. The first one is the silver box over the rear tire. It's going to get wet there and I sealed the edges with silicone rubber, but I do have a plastic controller enclosure that I will use. There's only one torque arm, and it's on the other side in the photo. I plan to add a second one.

I have a 52V Luna Mini in the rear bag to power the rear motor. That's a 36V Dolphin in front.

On dry pavement, the rear is good for 26 mph. The front is good for 20 mph alone. Together, they accelerate fast enough to scare me.

FWD by itself in the snow seems too slippery. RWD by itself seems stable. I have thumb throttles on both ends of the bars. Haven't fallen over yet.

In any case, our snow is now gone. I'd rather we not get any more in the Chicago area, but if we do, this is one thing to make winter more bearable.

When Spring comes, the front motor is coming off, along with the battery. Summer tires cone back too.
Last edited: Dec 7, 2016
S

I love how stealthy your bike is... can't tell it is electric at all, haha! "The best laid plans of mice and man,." Huffy conversion in Limbo(can I use a 500watt 36 volt controller with my 48 volt rack battery?)

R
Does anyone know what controls will work with a Bafang C961 display running a 48 volt battery?