Hey everyone - I have a question about your experience with Carbon for bikes/ ebikes.

Anecdotal observation - most trail ebikes today appear to be carbon, and can take a beating. Even smaller manufacturers like Lamere have a fairly robust Carbon line up.


I would like to get inputs / feedback from you if you have ridden one or have owned one.

Please note : we have test frames of most materials - titanuim (of course), PEEK (yeah, not ready for prime time yet) , Aluminum, carbon and steel. This is not a decision to go carbon - I want to understand the materials from the perspective of consumers.

@pushkar, Do you have some table of pros/cons with each material that you can share? It may help to stimulate more thoughtful feedback from the forum members.

Big thing is that there don't appear to be incredible weight savings since the frames need to be overbuilt to account for the additional stress.

This leads to a stiffer ride - you need good suspension if you are touring. May not be needed for city commuting.

I can totally see why Carbon is doing better for full suspension frames - it is a very cool combination if designed well. Check out the Lamere bikes fat tire.. https://www.lamerecycles.com/esummit ... totally works.

Your Carbon Fiber Bike May Be a Ticking Time Bomb

The high-tech material has been used to build frames and components for decades, but as bikes age, catastrophic failures are leading to lawsuits

I'm not sure why one would need to overbuild in carbon. Carbon fiber is a super strong material and used regularly in race cars (Formula 1 and Indy Car). My understanding is that as long as the fibers aren't layered in the same direction, you'll achieve structural rigidity.

Your comment on stiffness is accurate. There's not a lot of absorption in the material and full suspension makes sense.

But I'm not a materials engineer, so take these comments with a grain of salt.
Z

I think people like carbon for the same reason they like dura ace components. It is the latest and greatest and makes a difference for professional riders so it has to be the best. Right? I personally feel like for ebikes and the average person it is a complete waste. I would much rather have steel. Easily repairable. Better ride. So it might be 3 pounds heavier. That is a big difference in a 19 pound bike. A lot less in a 65 pound bike. With steel you want a new attachment for a light get out a welder. For carbon? Buy a new bike.

@Mr. Coffee I had previously read the article you cited. There is one example of a carbon fork. I cannot find articles about widespread failures of carbon frames in general, or ebikes in particular.

@AdilDesai The overbuilt piece is on on all joints. So not by much but enough to make it a little.... umm ... stubbier / chubbier. The analog bikes are more sleek, but ebikes frame is thicker on all joints etc.


Yeah.. materials wise - carbon is as strong /tough .. dont seem to have an issue there.
A

I'm not sure that the juice is worth the squeeze. I just read the article that @Mr. Coffee posted. Having to overbuild in certain areas now makes sense to me.

Given that it's hard to find the areas of stress/damage, a limited weight savings, likely cost premium, the speeds that an e-bike can travel, and additional internal vibrations due to the motor, I'd stick with aluminum or titanium.
E About The All Go Carbon The redesigned M2S Bikes All Go Carbon 2.0 features a carbon fiber design with a mid drive motor and 11 speed Shimano Deore drive-train to serve up tons of power to conquer any hill, yet feels like a lightweight mountain bike when you decide to switch the motor off... About The All Go Carbon The redesigned M2S Bikes All Go Carbon 2.0 features a carbon fiber design with a mid drive motor and 11 speed Shimano Deore drive-train to serve up tons of power to conquer any hill, yet feels like a lightweight mountain bike when you decide to switch the motor off...

If you are building a bike like that then counting weight could make a difference, but that same bike in metal would probably only be 2-3 pounds heavier. It also have a small motor and a 400 wh battery.

What is more worrisome is that very few bike shops are really equipped to evaluate if a carbon bike or some components are damaged and should be replaced. The consensus I have received is that most failures are caused by previous damage that causes the frame (or other component) to deteriorate. That previous damage may be very minor and is often undetectable without fancy gadgetry.

I agree that the light weight is generally a good thing, I also agree that carbon bike frames can be uncomfortably stiff.
E by comparison the aluminum Yamaha Cross Core is 43lbs . There is no way that those frames are 10 pounds difference in weight. I do not doubt that the weights are correct but there is a lot different about that bike then just frame. A steel road frame can be found all day at 4 pounds.
E 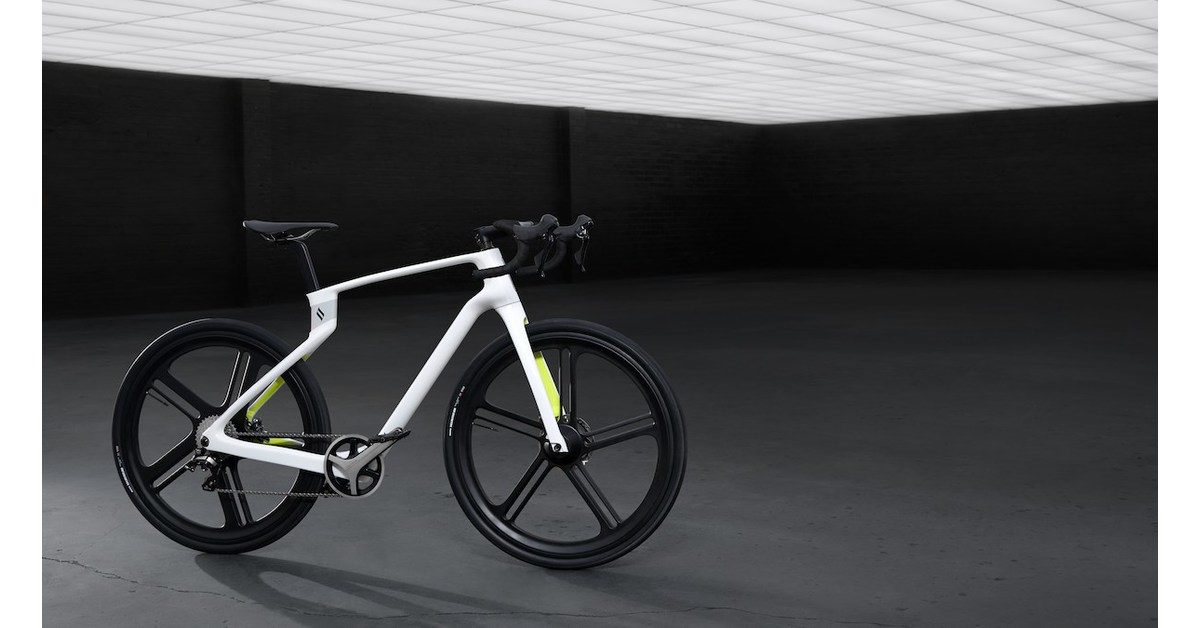 It is such a unique product, and I am tangentially aware of the crazy amounts of work going on in the background.

I really hope superstrata succeeds - if done right, thermoplastics can give carbon a serious run for the money when it comes to bike frames. It is really hard to make them correctly (tech and desgin and material characteristics ) are still new-ish but Doug and Bill @Studiowest have been crushing it with some amazing designs with thermoplastics.

Big thing is that there don't appear to be incredible weight savings since the frames need to be overbuilt to account for the additional stress.

This leads to a stiffer ride - you need good suspension if you are touring. May not be needed for city commuting.

I can totally see why Carbon is doing better for full suspension frames - it is a very cool combination if designed well. Check out the Lamere bikes fat tire.. https://www.lamerecycles.com/esummit ... totally works.
Click to expand...

LaMere Cycles seems to be a well developed company in this space out of Minn (US). They quoted me on a full suspension/full Carbon eMTB with Shimano e8000 motor with a claimed weight of 38lbs for approx 7k. Not sure how accurate the specs are, however, they claim they are using high quality carbon materials from a very reputable source. Looks like they do a good business for a private company.

It's interesting that the best of the best have carbon frames both Trek and Specialized have 15K plus bikes in the top end of their eMTB builds.
Right here on EBR a carbon fiber framed bike won best FS eMTB
Specialized Turbo Levo SL Expert

When Emountainbike magazine tested 25 FS eMTB a carbon fiber again came out on top for them this time the S-works version of the Levo.

Of coarse Watt Wagons has their own carbon fiber FS Ultra. To me if I can go from a 70 lbs bike to 57 lbs. that is worth something, I never really thought about until I had to lift that beast.
I would think a carbon fiber eMTB is built to handle what is was designed for, really would these top tier companies have carbon fiber as their flagships Ebikes if they were failing their customer that were aggressively riding the trails?

pushkar said:
Hey everyone - I have a question about your experience with Carbon for bikes/ ebikes.
Click to expand...

I bought and planned the upfitting of this bike for commuting (road only wet and dry pavement). Right about the time I was finishing the mods we hit Covid lockdowns so the commuting is done for the foreseeable future. But I have to tell you that, in spite of that, I'm glad I listened to my LBS on the addition of the carbon rims. It isn't just the rims but I took the carbon-framed Allant 9.9s and added the carbon Kinekt seatpost, the composite Baramind bar, Tannus liners and an Onyx hub. I figure the weight savings on the rims offset the weight gain of the Tannus liners. So I can't pin it down to one thing - the rims or the Tannus or the Kinekt etc, but I have to tell you the the bike is smooth, fast and sometimes feels like I'm floating over the asphalt (ok maybe a bit of exaggeration). But yes, the ride is really nice. There are the 10% of roads in my area that are so choppy and full of potholes that my teeth still rattle even on this bike. But for the 90% this is one sweet ride. Not sure if this addresses your post but had to share how great this ride is:

It seems to me that carbon frames provide more potential benefit to analog bikes than they do e-bikes. Or at least most e-bikes - the ones which have a powerful motor and a big battery (not the ones trying to be disguised as analog bikes, with small in-tube batteries and smaller/weaker motors).

With analog bikes, a carbon frame could be lighter than metal framed bikes, and could be made stiffer for less flex (and therefore more efficiency) under hard pedaling. But achieving the ultimate lowest weight and top level pedaling efficiency is just not as important on a normal e-bike. At least to me, the cost and potential fragility concerns don't seem warranted to want to go carbon.

I do see where a carbon fork could be very beneficial to an aluminum e-bike with a rigid front fork, as the carbon fork can be made more forgiving.

My experience with carbon frames comes from my old Look road bike. That bike was light and efficient - and boy could it be stiff and uncomfortable on less than optimal roads or longer rides (century rides).

Anecdotally, when reading eMTB reviews, I will see the occasional mention of wheel failures during testing. Invariably what fails is a carbon wheel. Wheels of other materials may be damaged during the test, but none are noted to have failed. Those guys definitely ride harder than I do any more, but what chance might a carbon wheel have as compared to an aluminum wheel if I make a mistake during a downhill run?

Lastly, although I really have no desire to ride analog bikes any more, this is doubly so with my old Look road bike. Through age and a couple of moves (dings/damage?), I just don't trust its structural integrity any more. If I still had an old road bike built with a Colnago steel frame, as I used to have, I would not have the same question about frame integrity and would feel free to ride it.

Carbon is great for many applications where great strength and rigidity at a reduced weight is necessary. We know that carbon components are used in race cars, for example. What most of us do not know is how often these carbon components are replaced, so that an unexpected loss of structural integrity does not occur during a race. Do some only last 1-2 races before being scrapped and replaced? I'll let the professional race teams worry about carbon failures - Aluminum and titanium are excellent materials for e-bike construction and I'm personally very happy with them.
You must log in or register to reply here.