So I was checking tire clearance for eventual placement of winter tires (700x40c studded), and I noticed that the way the motor power cable is run along the chain stay leaves very little clearance: 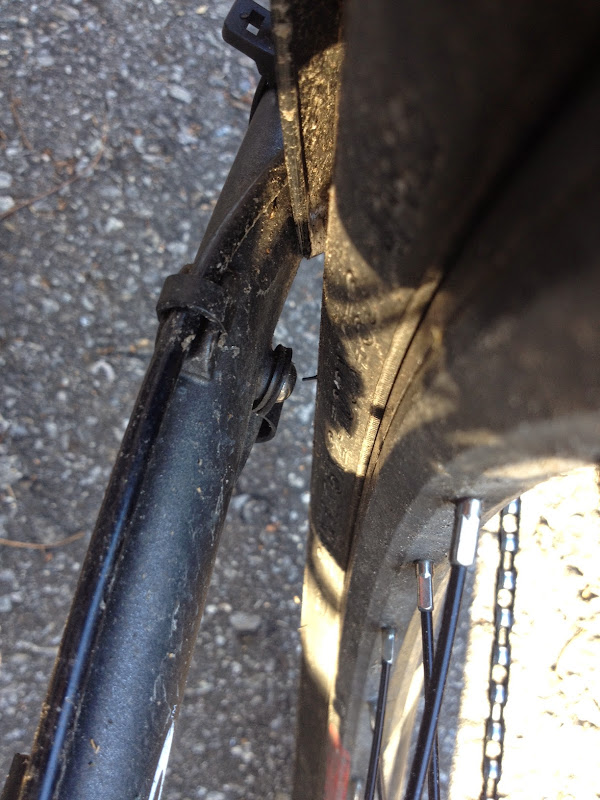 There's p-clip mount on the inside of the chain stay, which I think is a pretty dumb place to put it. The stock tires had about a quarter inch or so clearance. With the bike up on the stand though, I took a look at the power cable, and the tire had worn through part of the cable casing. Not enough to need replacement, but clearly enough to do something about the routing. I shifted the cable to be more on the bottom/bottom-outside of the chainstay and secured it there w/ some zip ties. The picture above actually shows it with the cable moved out of the way -- in it's orginal position it would be visible near the bolt. Now the only clearance issues are with the chain stay itself (as it should be) and the stock tire has more breathing room.

I think the small clearance was exacerbated by the fact the the bike was delivered with the wheels a bit out of true. I corrected that early on, but the damage to the cable might have been done at that time.

So, I'd advise everyone to take a quick look at the inside of the power cable where it runs by the rear tire, just to make sure it's all good.

Funny my P-clips are only near the disconnect, there is a cable routing/clamping clip at the business end, visually clear almost all the profile of the chain stay. Sorry it is out of focus, it is my day off. -S maybe it varies with how tight the routing is... on mine it was quite tight from the bottom bracket area to where the p-clip is, the only way to keep it from encroaching into the wheel area is to hold it back agains the stay.
P

Actually, looking again... you have a totally different clip arrangement than I do. Yours carries the cable under the stay nicely and is bolted from the bottom. Mine is a p-clip like the ones you have closer the the quick-disconnect mounts, but the bolt is on the inside of the chain stay.

haha, cleaning it once a week is the best I can manage.
You must log in or register to reply here.

Oct 18, 2022
Captain Slow
C
C
Lessons Learned After Owning A Fat Hydra’s For A While