So many are becoming people on electric bikes nowadays. As the search for the perfect bike can be an interesting road, too many are thinking only of high-powered, expensive E-bikes. This one from Freway could break that spell, offering you the ride you need, without slamming your budget to pieces. Freway is a relatively new company, yet has a few different E-bikes for the having. The VR-01 could be considered an entry level bike by some, yet might be all you are looking for. 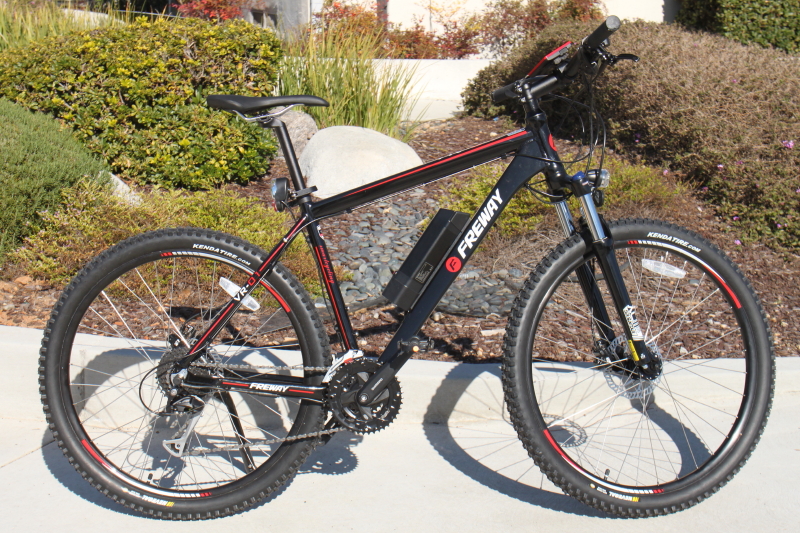 With some nice bike pieces, many will love this new E-bike.

It is in the style of a mountain bike, but like anything you own, once you have it you can use it anyway you like. I did a little trail riding on the VR-01, although staying on the streets and bike paths was mostly how I tested it. It performed well, getting me to each destination as a good bike should. They were able to keep the cost and weight low by keeping the electric-assist portion of the bike close to the European specs, something that may work for you or against you. This is something you will have to decide if you like or not. 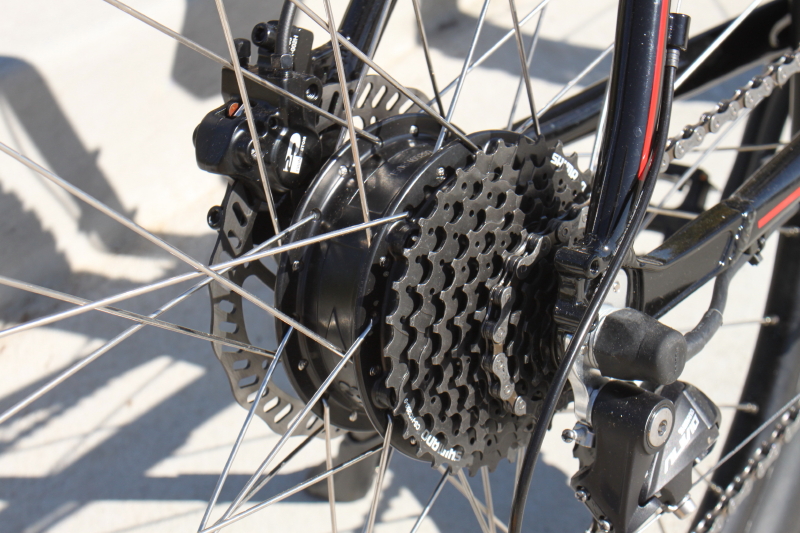 In today’s power hungry world, a 250 watt motor could leave you wanting for more, especially if you live in an area with massively steep hills. The truth is that most people don’t have that concern and this VR-01 can handle decent grades when you pump the pedelec control to the max. It is a true pedelec, meaning there is no hand throttle to allow you to get assist when you are not pedaling. This can invigorate your ride and promote a healthier experience, part of the reason you get any bike.

With the handlebar located button you can chose between 3 levels of assist. There is also an ‘off’ setting to allow you to ride as you would a regular bike. With the trim 41 lbs. overall weight, this is a easy option. I have bikes that aren’t electric-assist that push the scales even higher than the VR-01, so having that option of just riding is one you may not get on many of the much heavier E-bikes on the market. The bike world thrives on lightweight machines, something Freway puts forth with the VR-01. 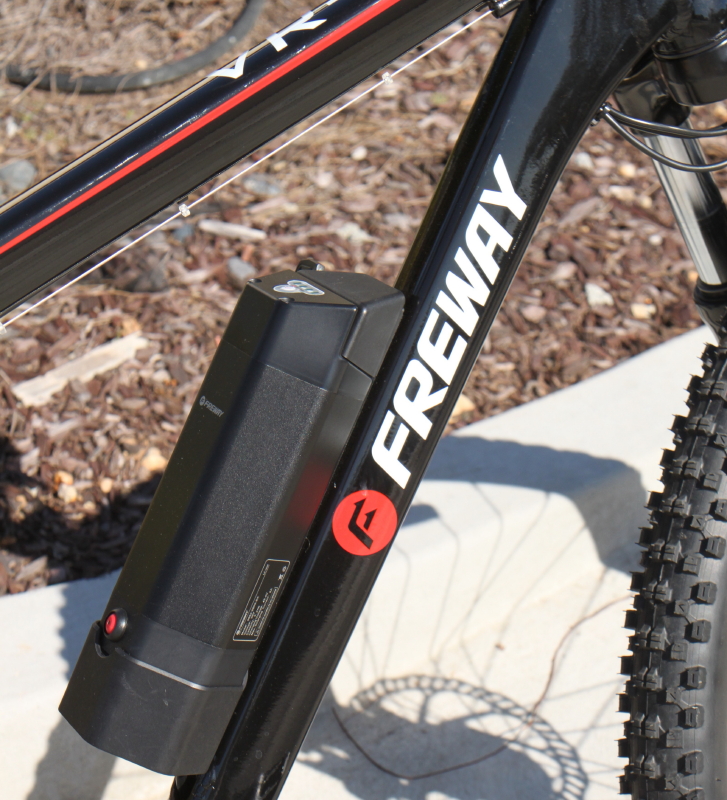 The battery is centrally mounted, yet weighs so little that it barely matters.

The frame mounted lithium battery is very lightweight. It is also has only a 5 Ah capacity, pretty small compared to its competition. Once again you may embrace or reject the premise that offers. Being that the motor uses minimal amount of power, it should still take you a long way. The Freway website shows a very long battery range (that I kind of think is not fully realistic), yet it should still go far between charges. The display and the battery power left indicator (on the actual battery) seemed to disagree some on my test bike, yet I never did run it all the way down to find out.

Speaking of that, the VR-01 I got for testing is most likely the same bike they had on display at the big CES show in Vegas recently. Being a demo bike, and with all that traveling and show abuse, I blamed that on the display discrepancies. Also, they told me that it takes a bit for the electronics to ’learn’ my riding style and set itself accordingly. The display is very modern with much going on, so that could be the case. It is a touch screen item and even has a settable pin code you need to enter before it comes on for bike security purposes. 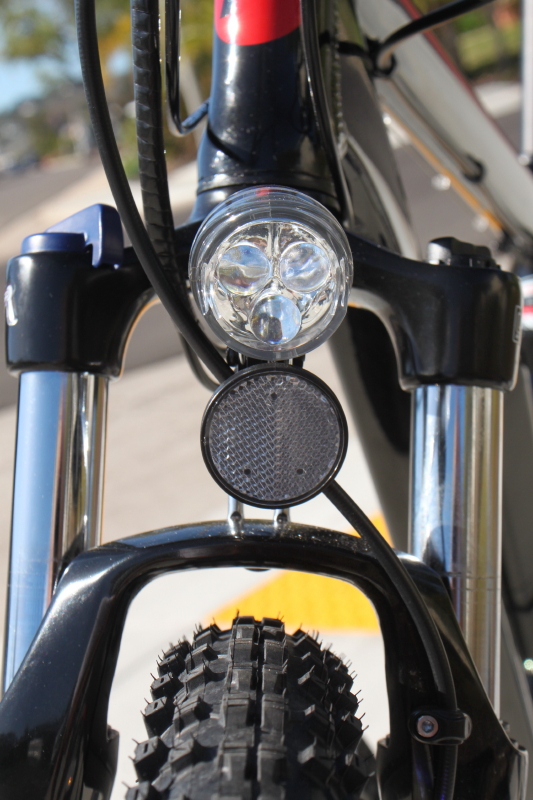 LED lights are part of the package—front and rear.

A lot of the actual bike pieces seem very nice. I went on their website to find things like frame material and other specs, yet it is slim pickings there. My magnet tells me the frame is aluminum and my eyes tell me the brakes are hydraulically actuated discs. The alloy rims mount 27.5” MB tires front and rear. With a careful count and some simple math I decided there are 27 gears to choose from with nice working thumb shifters. The plush front fork (it is a hardtail) has tension and lock-out controls. And of course, it comes with a ‘racing’ saddle that might be your idea of perfection, yet not mine.

The built-in front and rear lighting are run from the motor battery and you use the touch screen to get them fired up. The display lighting brightness can be adjusted, or you can set it to do that automatically depending on the ambient light. The beefy kickstand could use some thread locker on the bolts, as I had to retighten them several times, yet it meets my needs to keep the bike parked and upright. On the whole, the bike part all seemed to work together for a nice and solid ride. 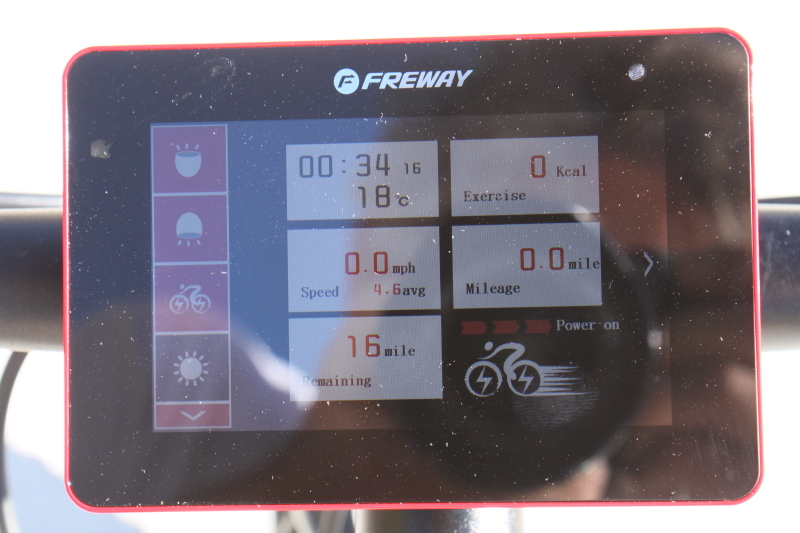 It was hard to get a good photo of the display. Much going on here, yet the numbers are pretty small.

I didn’t get one with the bike, but they offer a workstation dock that converts the battery for camping and electronic device fun. It has USB outputs, a flashlight and some kind of SOS alarm. I can’t say I’ve seen other E-bikes with this option. Along these lines they claim the bike’s electronics are very advanced and compact.

Well, I rode the VR-01 quite a bit, took it on group rides, let others try it and generally put it through its paces many times. I personally like more of an upright E-bike, yet enjoyed the racy feel I got while in the saddle. Even though I used all the assist levels, I do admit I left it in the maximum setting (#3) most of the time. It doesn’t hit the 20 mph legal speed on its own, but not everyone wants to go that fast. The power is sufficient, yet not excessive. I like the soft-start way the motor powers up making for a smooth rush of power that never intimidates. 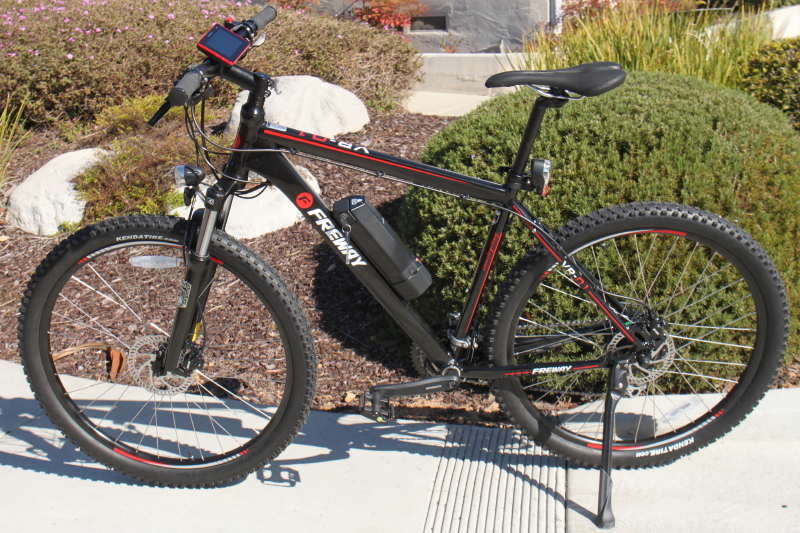 I don’t think Freway has many (or any) retail outlets. This almost certainly makes it an on-line item (I could be wrong here and it is possibly changing as I write this). I am mostly against buying E-bikes through the mail. Any electromechanical device needs TLC for assembly, and has both short and long term service and maintenance needs. At the VR-01 buy-in price, it could be worth the risk, your decision. Plus if you are like me you want to gets some hands-on (and saddle-on) time with your new bike before the sale.

When I set up this test with Freway I was fully expecting to get their premium Buffalo model. I do hope to test and review that sometime later in the year. Still I was happy to get this time with the VR-01. I (like many others) get spoiled by the big buck, over-powered E-bikes, so it was nice to get back to my E-bike roots (so to speak) with this inexpensive bike. Like I said above, this might be all you need and want.
D

My local bike shop has one of these on clearance and I test rode it. I also test rode some other bikes that had 500w motors and that left me feeling like this bike was very under powered for me (six foot and about two hundred pounds or so). The controls and the LCD display worked well and I thought it was nice that it had things the more expensive bikes did not (like the built in lights, USB port on the LCD to plug things into for charging, etc.). The range is also a potential issue for me since I plan on commuting to school and need something with a 20+ mile range. I actually went back to look at it again today as I was considering swapping out the iZip Zuma I have on hold for this one, but I'm still on the fence about it. I've also got a number of injuries and like you said, I prefer a more relaxed upright position that this does not offer. For people that don't have that problem, it's not an issue. I ended up staying with the Zuma, but this seemed like a decent bike (especially considering they had it on clearance for around $1000) for what they were selling it for.
You must log in or register to reply here.

Hello everyone, David from WI.

J
An ebike to carry up and down stairs?