I've been in contact with a dealer that both sells name brand bikes like Haibike, M1, Bulls, and Yamaha, as well as does builds with frames from DengFu.

I'm looking for a multi-purpose bike, for 30-50 mile on-road rides with hills (sometimes steep and high), as well as for some off-road trail / cross country riding. Often, we'll bike to a trail head and go off road. I also have access to a 40 acre private parcel next door to me. I'm at a stage in my life (60 yrs old) where this could be the last bike I buy, and I'm not hurting for money, so I'm prepared to spend what it takes to have something I look forward to riding. For instance, I had briefly considered the Biktrix Juggernault Ultra FS, but at 75 lbs with battery, it's just too darn heavy, and equipped the way I'd like it's still over $5K, and even then I'd want to upgrade certain pieces. If I'm spending that, I'd rather spend more and not have the compromises.

Given my aspirations for fast on-road and some off-road, I need a wide gear range. What I'm thinking is the SRAM Eagle AXS drivetrain. It's got a 10-50 cassette (almost as wide as the Rohloff!), and it's the coolest wireless setup I've seen, with a reduction in wires from the cockpit. It's pricey, but not as pricey as a Rohloff. BTW, I've test-ridden a couple of different bikes with the Rohloff (R&M Delite and Luna Apex) and honestly I don't like the shifting on either the cable nor electronic versions.

The dealer currently has the frame fitted with a Cane Creek Helm fort and a DTSwiss R535 ONE rear shock - they seem like good choices, but I'm open to suggestions.

For brakes, it's got Shimano XT, which are good, but part of me is thinking of keeping in the SRAM family and getting the Code RCS brakes. I've heard good things about the Hope Tech 3 E4 as well - anyone got experiences to share?

At my age I want a more upright position than most FS bikes are setup with, so I was thinking the SQLab 12 degree carbon bar with 45mm rise. When I swapped an aluminum handlebar for a carbon bar on my Seven Cycles road bike (which I still ride), it was like night and day in terms of arm pain.

Tire/wheels? I'm thinking 29ers (I'm 5'11", btw) and would be looking for nobby tires that have a mostly continuous set of nibs down the middle for on road behavior. The bike has DTSwiss 240s hubs with Racing Ralph/Ray 2.25" on them - maybe I should look for wider tires for both comfort and gravel/loose dirt trails.

This can be an open thread, but what I'm most interested in are:

I'm leaning towards the M1, if only for the bigger battery and overall looks, and well, spending big bucks on a Chinese knock off carbon frame doesn't seem wise. Does it? The Bafang integrated battery turns out to be only 600 wh, btw.

smorgasbord said:
I'm the OP - thanks, all this has been a great thread. I've decided that the Delite, while a great bike in many ways, was not designed for me and the kind of riding I expect to do. I won't be commuting or doing multi-day expeditions. I need a lighter bike, since I'll often be loading onto a hitch-mounted bike rack to drive to places to ride. While the Rohloff is great in some ways, it's lacking in others - at least in my eyes - and for me the main reason for the Rohloff would be to get the Gates belt. The new Bosch motors seem like they're going to be great (lighter, stronger, no resistance once they stop assisting, etc.), and the integrated batteries help make the bike look like something worth $8K+ instead of the current "bike kit" look.

My current thoughts on what I should be getting are in this thread. I haven't given up on full suspension, but I want a carbon frame for weight and "feel," and I believe I can get away with a seat post mounted rack since I won't be carrying much weight on it.
Click to expand...

Since you pointed out to this new thread I will be writing my thoughts to this one.


For FS bikes seatpost rack is not the only option, you may want to look at this one Thule Pack'n Pedal Tour Bike Rack. If rohloff is not necessary take a look at this one Haibike fullseven Carbon. It is very light for an ebike , full carbon and top of the line components with DI2 shifting. Was on sale around 5000-5500 not too long ago there maybe some stock left somewhere.


M1 looks like a nice bike too and I really liked their no nonsense approach, when they were asked how much speed model costs they answered "the same, it is just different software". If they have good customer service why not.

Too bad that Luna didn't order more X-1's as that would be a contender. The M600 Bafang motor is 120nm torque and all one would need considering it weighs very competitively to the major manufacturers like Brose and the new Bosch. I like the geo better on the Luna than the Dengfu also. It has 27.5+ wheels so the diameter is close to 29"es and you will really like how plush they are and good traction.

At $3550 for $1500 you could put the SRAM gearing on and sell off the stock stuff and be under 5k. Handlebars and saddle are all about personal preference and you would be lucky to find a bike that has exactly what you want component wise if you are savvy to what's available and what works for you. On the other hand going full custom can cost alot also over getting a floor model.

Also the x-1 has a 650wh battery and you can get a second one for $550. I think you will find that 650wh will give you a decent amount of range, 40-50 miles depending, but if you need more carry the extra that way you don't always have the weight on board like you will with the M1 which is by no means a light bike in itself.

Johnny, I did look at that exact Thule rack. My concern is that by mounting to the swing arm it contributes to unsprung mass. In essence, everything on it will bounce with the rear wheel. But, I agree it is one option.

I have also looked hard at the carbon full suspension bikes from Haibike, Trek, and Norco , but I don't want to have European power restrictions on the Bosch, Brose, or Shimano motors at the prices I'd be paying. The new 2020 Haibikes will have the TQ motor like the M1, but they're not available until early next year - and I think the M1 would be better for not much more.

JRA, I had been looking hard, not at the Luna X-1, but at the Luna Apollo. If either had been in stock I probably would have pulled the trigger. Good point on using the X-1 as a base from which to customize. Does anyone know what the batteries for the X-1 look like? Are they a different form factor than the Bafang integrated?
J

I understand your concern about unsprung mass. Maybe you can have something custom built which will attach to the seat tube after getting your bike.

I also agree that it is a very bad practice for manufacturers like Bosch, Shimano, Yamaha, Brose etc. to use restrictions as an excuse to price discriminate for a simple software top speed change. The speed limit should be decided by the buyer at the time of purchase and the manufacturer simply let the seller update the software accordingly then putting it on the sale agreement.

I can't find the actual weight of the M1 Spitzing Evolution - do you have a number or link? The Evolution's frame is supposed to be 25% lighter than the previous version, btw.

I would get the M1 R pedelec-45mph, this way any Stromer would be left crying ? when trying to race you (not sure what is the model name ?, is not the Evolution one ) with the 880watts motor/1080wh. The TQ motor is actually capable of even higher torque then the 120nm, it is just set up that way. A DIY ebiker can help with that delimitation
They do have them in very light setups also, the special edition ones. Check their website.
The Haibike Flyon would be 2nd choice but not sure about the Us version restrictions.

Then there is the Optibike carbon one. Probably top choice given the builder reputation.

Enjoy whatever dream toy you will get !

Sorry I don't. I did ride one at inter bike two years ago, with the 25% heavier frame, but it had the 1080wh battery which is what really needs to be 25% lighter. No scale but the thing weighed like a Stromer lifting it off the ground. And by that I mean that I went for the lift with my usual amount of verve as my 45lb bike and it didn't even leave the ground. No denying that once underway the TQ motor unrestricted has alot of power and moves the weight well and has decent ergonomics and suspension but that is why it has such a big battery, power eats wh's. YMMV but I find that power to weight ratio at the eBike level is even more critical than that in motorsports. I don't subscribe however to the put a little motor/battery to make a light bike however because to me it just doesn't do what I like an eBike to do.

JRA said:
Too bad that Luna didn't order more X-1's as that would be a contender.
Click to expand...

I just read a thread on Luna's forum that claimed the Dengfu frame I'm looking at is the same one that Luna uses for the X-1. If so, it would seem more cost effective for me to get that (cheaper) version, upgrade the components I want, and then even have what appears to be a better Luna battery.

Does anyone know if the Luna battery is plug compatible with the Bafang battery?

"Does anyone know if the Luna battery is plug compatible with the Bafang battery?"

JRA said:
"Does anyone know if the Luna battery is plug compatible with the Bafang battery?"

I tried their Chat, and the person had no idea since it was "an unreleased product." Pretty useless - couldn't even tell me the sprocket tooth count on the cassette. 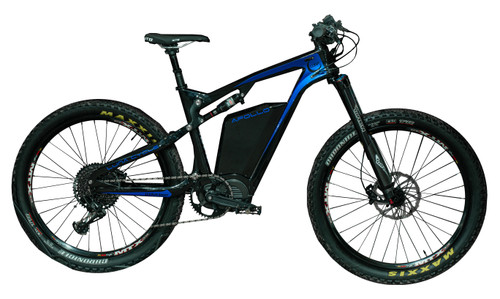 Great price for what is w/o a doubt the best, lightest, most powerfull notmal emtb. On the market right now.

Congratulations on an excellent purchase !! Did you also get their 1year warranty ? I would also invest in a Grin Satiator Charger. You can charge @8amps. Or a 10amps Charger from aliexpress.

Interestingly the Enduro x1 is on sale now, that was the top offering and hard to get also awhile ago.

I did not get the warranty. I figure I have during the initial 90 day warranty period to decide if I want to buy more. Since it's mostly for parts not labor anyway, I may skip it since I'm quite handy around bikes.

The included Luna charger does all that I'd want, so no need for a Grin Satiator. I don't like to charge at high amperages (the Luna does 5 amps) anyway, and with a battery this size (1100 watt-hours) I'll be fine charging overnight.

BTW, some specs not shown on Luna's page:
Bike was adjusted extremely well when I picked it up. Very smooth operating. Very nicely specced bike, too.

smorgasbord - Any update on your purchase? Are you still enjoying the apollo? Have you had any issues?
Thanks
You must log in or register to reply here.