E-Bikes Are Having Their Moment. They Deserve It. https://nyti.ms/3eLA2Lr

Timpo said:
I don't have an account on NY Times so it won't let me read Subscribe to The Times for a special rate using my link.

To thank you for your support, five public high school students will get access to The Times after you subscribe.
www.nytimes.com

Subscribe to The Times for a special rate using my link.

Many of us are entering a new stage of pandemic grief: adaptation. We are asking ourselves: How do we live with this new reality?

For many Americans, part of the solution has been to buy an electric bike. The battery-powered two-wheelers have become a compelling alternative for commuters who are being discouraged from taking public transportation and Ubers. For others, the bikes provide much-needed fresh air after months of confinement.

So it’s no surprise that e-bikes are now as difficult to buy as a bottle of hand sanitizer was a few weeks ago. In March, sales of e-bikes jumped 85 percent from a year earlier, according to the NPD Group, a research firm. Amazon, Walmart and Specialized are sold out of most models. Even smaller brands like Ride1Up and VanMoof have waiting lists.

That’s a remarkable shift. For many years, e-bikes carried the stigma of being vehicles for lazy pedalers and seniors. The bikes draw power from a battery and motor to make pedaling significantly easier. You can also accelerate with the press of a button, transforming cycling from a strenuous exercise into a joy ride.

“I was convinced that e-bikes would completely change cities all over the world in the next 10 years, but it seems like because of this crisis, suddenly it’s all happening in the next three or four months,” said Taco Carlier, the chief executive of VanMoof, which is based in Amsterdam.

If you are contemplating an e-bike purchase, there are trade-offs to consider. For one, the battery packs and motors add bulk. For another, these ostentatious bikes may lure thieves.

Refer your friends to The Times.
They’ll enjoy our special rate of $1 a week.
To find out what you get for your money, I tested two different e-bikes on the streets and steep hills of San Francisco over the last two weeks. Both can be ordered online: VanMoof’s $1,998 S3, an internet-connected smart bike, and Ride1Up’s $1,495 700 Series, which is more like a normal bicycle with a battery and motor.

After the tests, I’m totally sold. E-bikes, I concluded, are for people who want to get around quickly with minimal effort — and that’s a large portion of the population. Here’s what you need to know.

Is It Safe to Keep Employing a Cleaner? Wrong Question, Lady

Do Runners Need to Wear Masks?

What Is New York Without New York Bars?
Comparing the e-bikes.

E-bikes with pedal assistance. These use a motor system and sensors to detect how fast or hard you are pedaling and determine how much power to provide. So if you are pedaling hard or slow up a hill, the motor will use more power to assist you. Well-known brands include Trek, Specialized and Fuji.

VanMoof’s S3, which was released in late April, is a pedal-assist e-bike. Instead of a throttle, it has a Turbo Boost button on the right handlebar, which immediately gives a jolt of power. It has a top speed of about 20 miles per hour and can travel about 90 miles on a full charge.

VanMoof e-bikes are known for their antitheft security. Kicking a button on the rear brake activates an electronic lock, which makes the rear wheel unmovable. Trying to pick up the locked bike triggers a loud alarm. In addition, the bike includes a cellular connection to help you find it if it’s stolen, using VanMoof’s smartphone app.

Ride1Up’s 700 series has both a throttle and pedal assistance. On the left handlebar is a small screen with buttons to let you select the pedal-assist level; on the right handle bar is a gear shifter. With a larger, faster motor than the VanMoof, the Ride1Up has a top speed of 28 m.p.h. and can travel about 50 miles on a full charge.

Image
Ride1Up’s control panel offers nine pedal-assist levels.
Ride1Up’s control panel offers nine pedal-assist levels.Credit...Jim Wilson/The New York Times
For two weeks, I alternated between riding the VanMoof and the Ride1Up. I found you get what you pay for: While $1,500 buys you a nice e-bike that takes time to get used to, like the Ride1Up, an additional $500 secures you a VanMoof, a smarter bike that is extremely simple to use.

The VanMoof’s motor system made pedaling feel more natural and smooth, like riding a normal bicycle but with a bit of oomph. The motor was also very quiet, and at points I forgot I was riding an e-bike. In areas where pedaling was more challenging, like hills, a press of the Turbo Boost button provided an extra push.

The Ride1Up bike was less intuitive. The control panel on the handlebar lets you choose from nine pedal-assist levels. Level 3 felt sufficient for getting me around the streets, but Level 5 felt better for getting up hills. Sometimes, when trying to pedal from a stop, I forgot to lower the pedal assist from Level 5, which caused the bike to jerk forward. That was a bit scary.

Ride1Up offers a YouTube tutorial on advanced settings for people to adjust the power of each pedal-assist level. Eventually, I reduced the power output for Levels 4 and 5, which made pedaling smoother.

As for the Ride1Up’s throttle, which is a trigger on the left handlebar, it was nice to have the option to accelerate without pedaling when I was getting exhausted. It did feel like cheating, though.

E-bikes are heavy. The VanMoof weighs about 41 pounds and the Ride1Up about 55 pounds — more than double the average road bike, which weighs about 20 pounds. You probably won’t want an e-bike if you’d have to regularly carry it up many flights of stairs.

Maintenance may be tricky. VanMoof and Ride1Up said their bikes were designed to be user-serviceable, and any local bike mechanic should also be able to service minor parts, like brake pads.

But with e-bikes in general, you may need to seek help from the maker if something major goes wrong with proprietary electronic components. It’s a safer bet to buy your e-bike from a local store that can service it.

They may attract burglars. Parking the VanMoof made me anxious. Whenever I was locking it up, it got lots of attention from passers-by — it looks like an elegantly designed tech product.

A VanMoof spokesman said that up to 20 of its bikes are reported stolen each month worldwide, and that 70 percent are found within two weeks. So make sure to have renters or home insurance that covers the theft of e-bikes. (VanMoof offers its own three-year insurance for $340.)

Batteries are expensive. Like smartphones, e-bikes use consumable batteries that eventually need to be replaced. With regular riding, the batteries for the VanMoof and the Ride1Up may deplete in three to five years. Replacements cost roughly $350.

But the pros outweigh the cons.
Despite some misgivings, my experience with e-bikes made me realize the benefits are far greater than the downsides.

Most important, e-bikes kept me out of my car. Whenever I had a reason to go outside — like making a trip to the grocery store or dropping off baked goods at a friend’s — I preferred riding an e-bike.

This will become increasingly important in the coming months. As businesses reopen, the Centers for Disease Control and Prevention has advised commuters to drive in cars alone. An e-bike may become crucial for squeezing through nightmare traffic.

There’s another benefit, which is important in hard times: E-bikes bring joy. I’m no fan of cycling in San Francisco, but on an e-bike, I saw more of the outdoors than I normally would, while keeping a safe distance from people. That beat bingeing on Netflix.

So I’ll probably buy an e-bike soon, even if it means getting on a waiting list. I figure we could all use a little more joy.

E-Bikes Are Going Mainstream
Thinking of Buying a Bike? Get Ready for a Very Long WaitMay 18, 2020

Opinion | Jennifer Finney Boylan
How an E-Bike Changed My LifeAug. 20, 2019

As a Mountain Biking Motivator, Add a Little Electronic AssistNov. 13, 2019

Correction: June 3, 2020
An earlier version of this article referred incorrectly to part of the VanMoof bicycle's anti-theft system. The bike has a cellular connection to help owners find it if it has been stolen, but it does not include GPS.

Brian X. Chen is the lead consumer technology writer. He reviews products and writes Tech Fix, a column about solving tech-related problems. Before joining The Times in 2011, he reported on Apple and the wireless industry for Wired.

To read the article online: copy the above link, remove the stars (I put them there so this forum didn't automatically make the address a link), then paste the url into your browser's address bar. Should go right past the paywall and open the article online.

Hope the address copy works - it's an interesting article...

To read the article online: copy the above link, remove the stars (I put them there so this forum didn't automatically make the address a link), then paste the url into your browser's address bar. Should go right past the paywall and open the article online.
Click to expand...

Worked for me. Thank you.

Quick tip for paywall articles - copy the article address into bitly.com and it will give you a shortened address. Paste that shortened address right after the last slash at the end of this address: http://outline.com/ and you will get the article with all graphics but minus the ads.

Timpo said:
I don't have an account on NY Times so it won't let me read

You can usually read five (5) free articles per month. Clear out your cache on your computer.
It's a simple superficial article with some points that I agree with.

If I could figure out how to delete this thread, I would! Didn't realize it was going to be such a pain - sorry!
D

I was able to read it. No problemo... 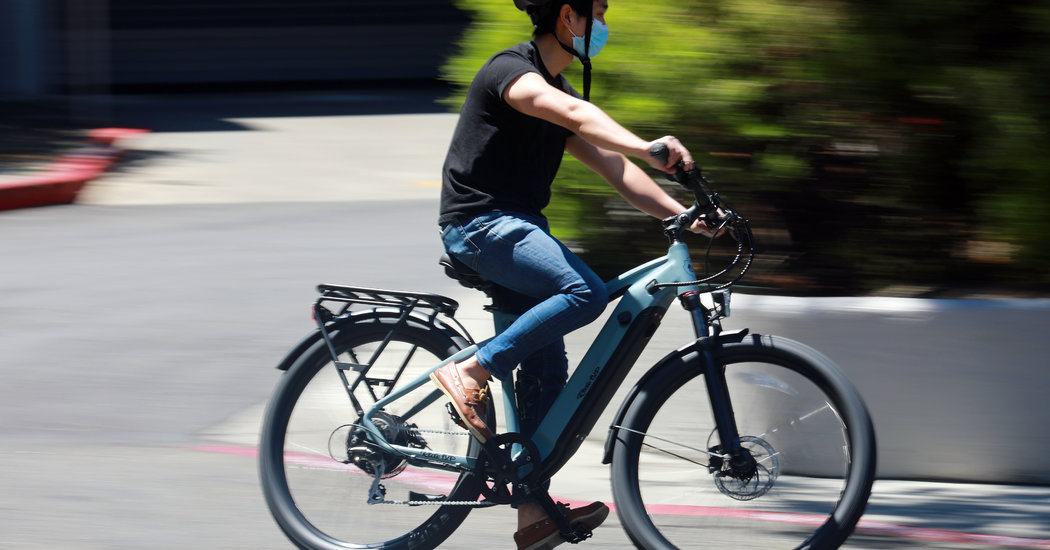 E-Bikes Are Having Their Moment. They Deserve It.

The benefits of owning a battery-powered two-wheeler far outweigh the downsides, especially in a pandemic.

www.nytimes.com
You must log in or register to reply here.

I think I've decided I'm going to bite the bullet
2