I found this to be motivating....

It is official, Optibike has now been building and selling electric bikes for 10 years! It seems like yesterday when we loaded our first Optibike 400 into the waiting truck for its trip to South Africa.

Optibike is now the oldest manufacturer of electric bikes in America! Today we still focus on quality and performance first. We strive to be the best, not the biggest and results show it.

Now we have sold bikes old over the world from Russia to Indonesia to Brazil. In all, people in over 28 countries have bought an Optibike.

While Optibike set the standard for the electric bike industry of what performance and quality meant, what always was most fulfilling to me was how we changed peoples lives.

We have had people lose 80 pounds, end their use of prescription drugs, rekindle their relationships and have the time of their life as they remembered what is was like to be a a kid again and feel completely free and energized. This is amazing.

Over the years, Optibike has been featured on ESPN, CNN, The Today Show, National Geographic Adventurer, and in The NY Times.

Optibike has always been ahead of its time. In fact, or first model, the 400 in 2007 has higher performance than the popular European systems today. But we didn't sit still, as the R15 has 3.8 times the power of the 2007 model!

Our Electric Bikes are custom built with artisan quality one at a time, and they are the worlds fastest and longest range High Performance Electric bikes available

Over the years our product line has expanded and we currently offers electric bikes for commuters, performance enthusiasts, and off roaders. We are the only company to offer a diverse line of bikes in different power, performance and price categories.

I feel proud when many of our customers are ordering their 4th and 5th Optibike. They started with the first Optibike released and are now on the latest R15. This says a lot about Optibike quality and performance.

I just spoke with a customer who has the original 2007 400 with Nickel Metal Hydride battery and it is still running strong after 10 years.

Some of the highlights of the last ten years are below. I hope you enjoy reading them. They have brought back some good memories to me. 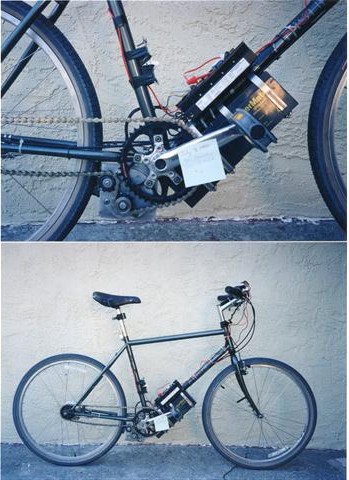 This unit featured 24 volts with a 15 amp-hr lead acid battery and about 350 watts of power.

The motor was off board on the crank axle and drove through the final drive chain (other companies still use variations of this design today). Optibike did not file any patents on this design as it did not meet the final design objectives of high power in a small efficient package.

This prototype validated the superior performance of the mid-drive and led to the development of Optibike MBB and several patents. The MBB design integrated the mid drive into a small compact package that it is today.

The MBB has evolved since then, with now over 3X the power of the first units and superior reliability. All Optibike MBB's are still made in the USA.

The first prototype pictured here, without suspension, also convinced us of the need for suspension. 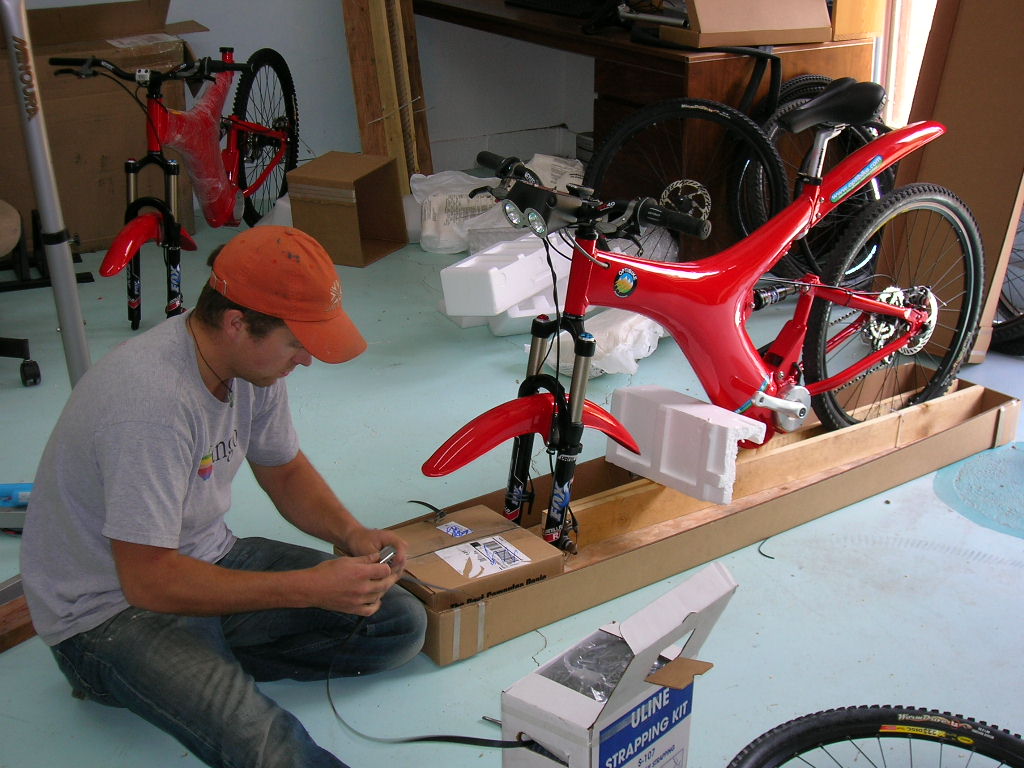 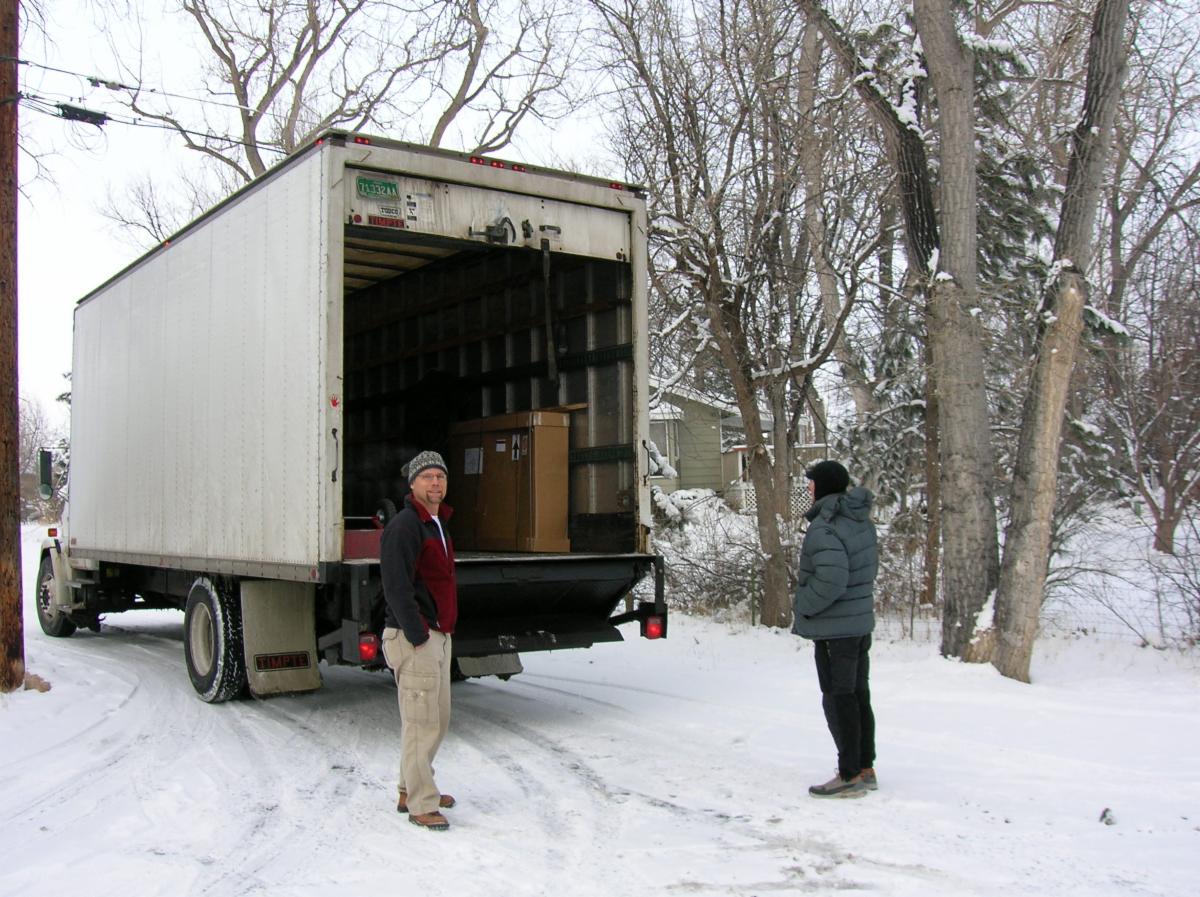 2007
First Optibike being Loaded for Shipment to South Africa
After 10 years of development, we were finally in production!

The Model 400 had 400 watts of continuous power, 90 Newton Meters of torque and a 37 volt 13 Amp Hour nickel metal Hydride battery that weighed 17 pounds.

Check out the R15 at the end of this email to see how Optibike performance has increased four times in the last ten years. 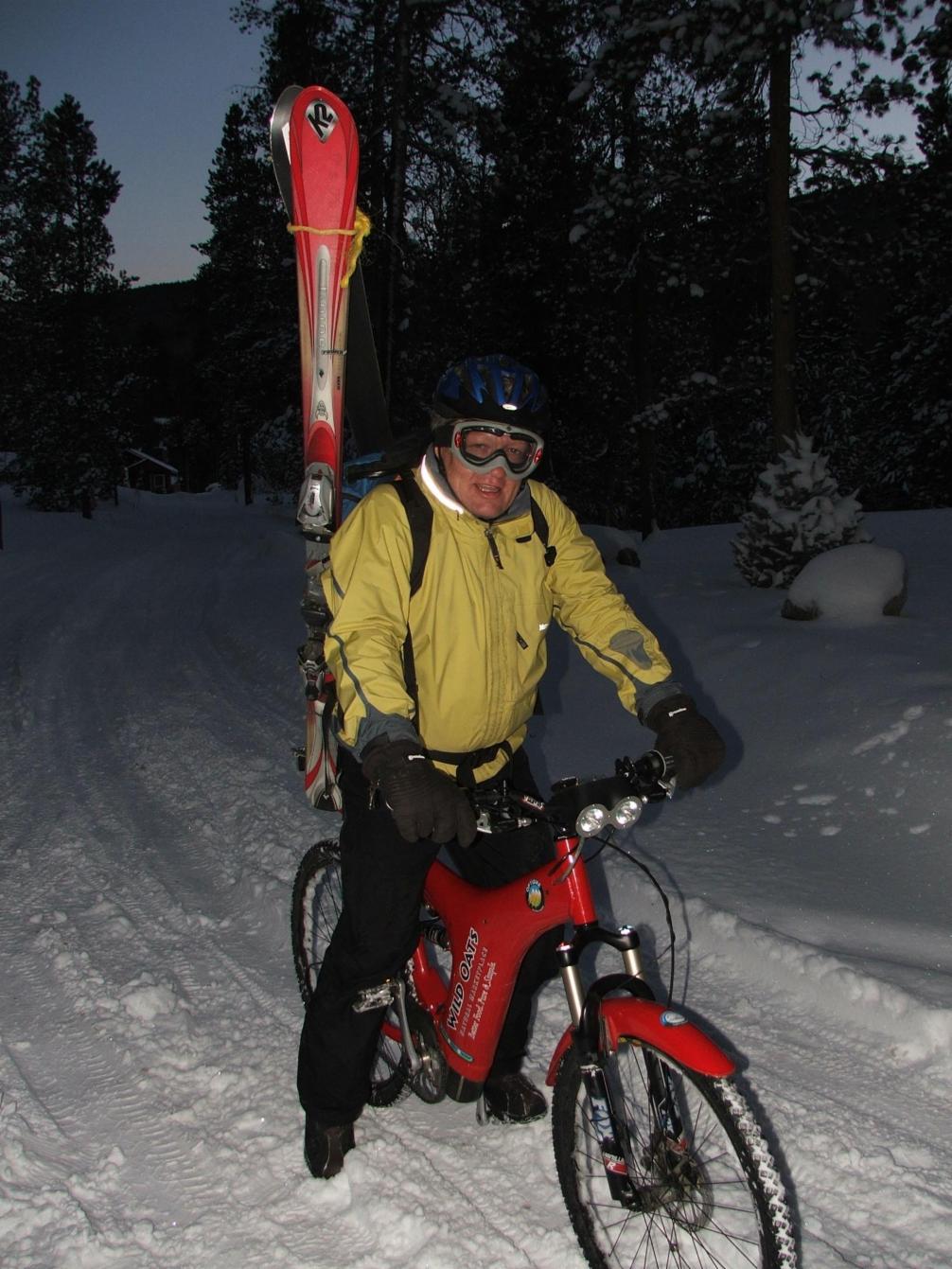 2007
Jeff Baum buys an Optibike R8 to ride his breathtaking 10 mile commute through the snow from Frisco to Breckenridge.
He goes up and down snow covered winding roads in the Rockies - to his job as the executive director of the Breckenridge Music Festival.

For most of his 10 years at the Festival, he had driven a standard gasoline -powered sport utility vehicle. Then he found the freedom of the Optibike.

It takes him a little longer to get to work, but the bike is more dependable, more nimble, more invigorating and just more fun than the S.U.V., he said. (and yes, he does take his skis with him)

The Colorado Inventor Showcase was Sponsored by the DaVinci Institute. 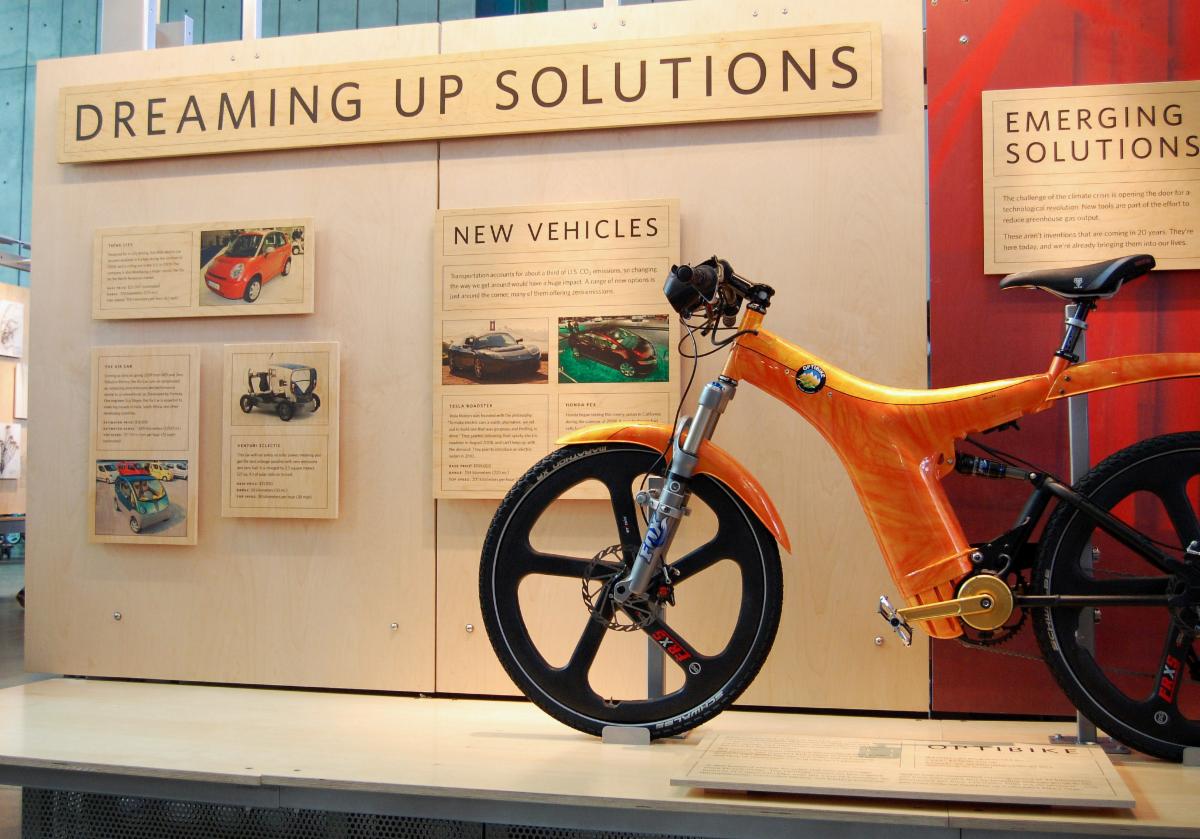 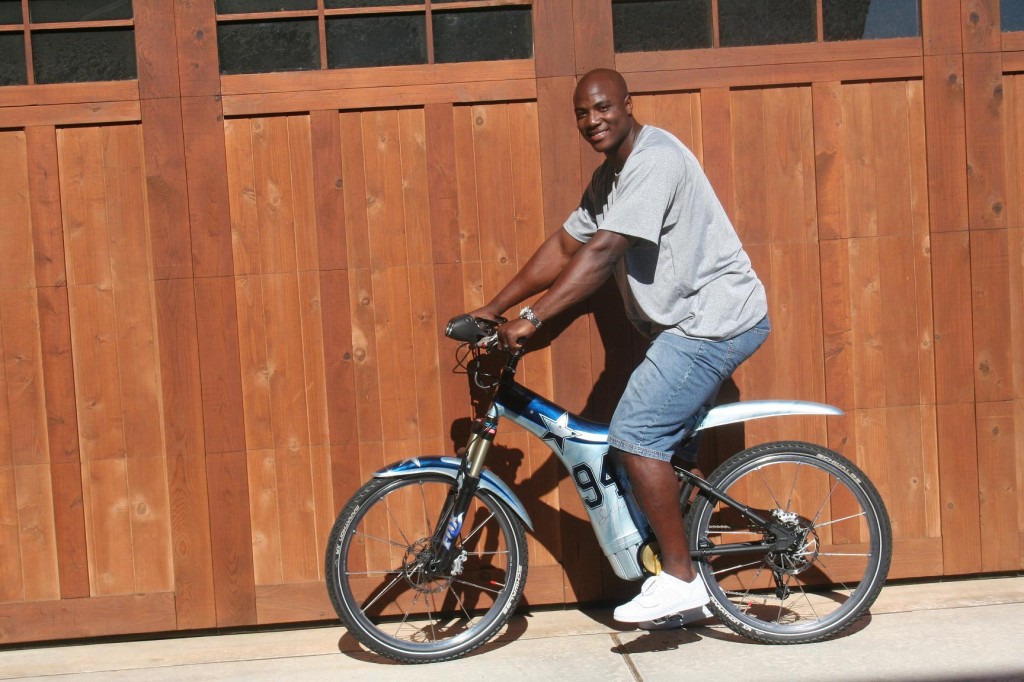 2009
DeMarcus Ware of the Denver Broncos (then of the Dallas Cowboys) buys an Optibike to use as of part of his training as a lineman
DeMarcus says: “I’ve been riding my Optibike OB1 for over a month, and I can’t stay away - I absolutely love the bike. I ride it every single day as part of my training regimen. In the suburbs or on the hills at training camp, this bike will be with me. It is the perfect cross-training tool for me because it allows me to get a great workout yet still enjoy what I’m doing. I would recommend an Optibike to anyone who has those same goals.” 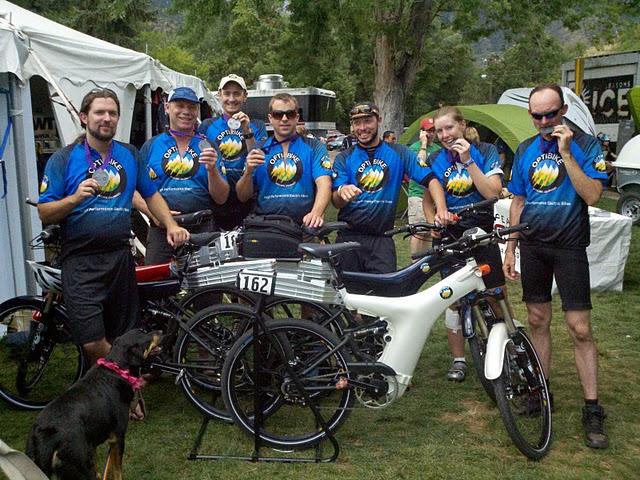 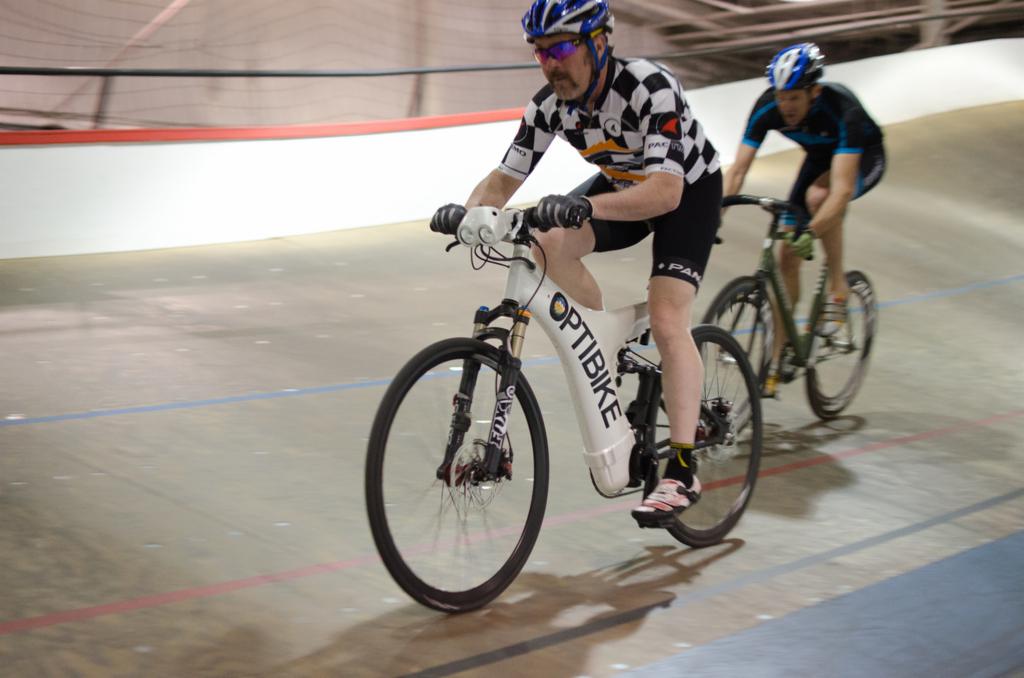 Optibike has found its place as a coaching and pacing tool in Boulder’s renowned velodrome.

“The Optibike has been really useful to us" Tim Kyer said “Our track here (in Boulder) is small and makes for a unique dynamic ride. Optibike is helping riders learn the smooth pedal stroke and a consistent speed in and out of turns”

“We are using the 1100R model and are seeing a lot of ways that Optibike is used for a training tool. We can get through multiple workouts and groups on one battery charge.”

In other indoor cycling centers, electric and gas scooters are used. However, there is exhaust and emissions from gas machines.

The Optibike is the first electric bike powerful enough to lead a pack of very powerful cyclists and replace the scooter/motorcycle derny. 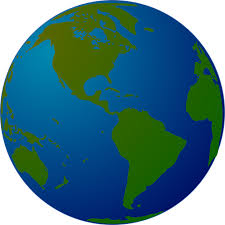 2011
Optibikes have been sold to customers in 28 countries
By 2011 Optibike had delivered bikes to riders in 28 countries. The riders were from all walks of like, with a common interest to have a high performance bike that changed their lives. They all ordered their bikes direct from Optibike and each one was hand built one at a time, just like today. 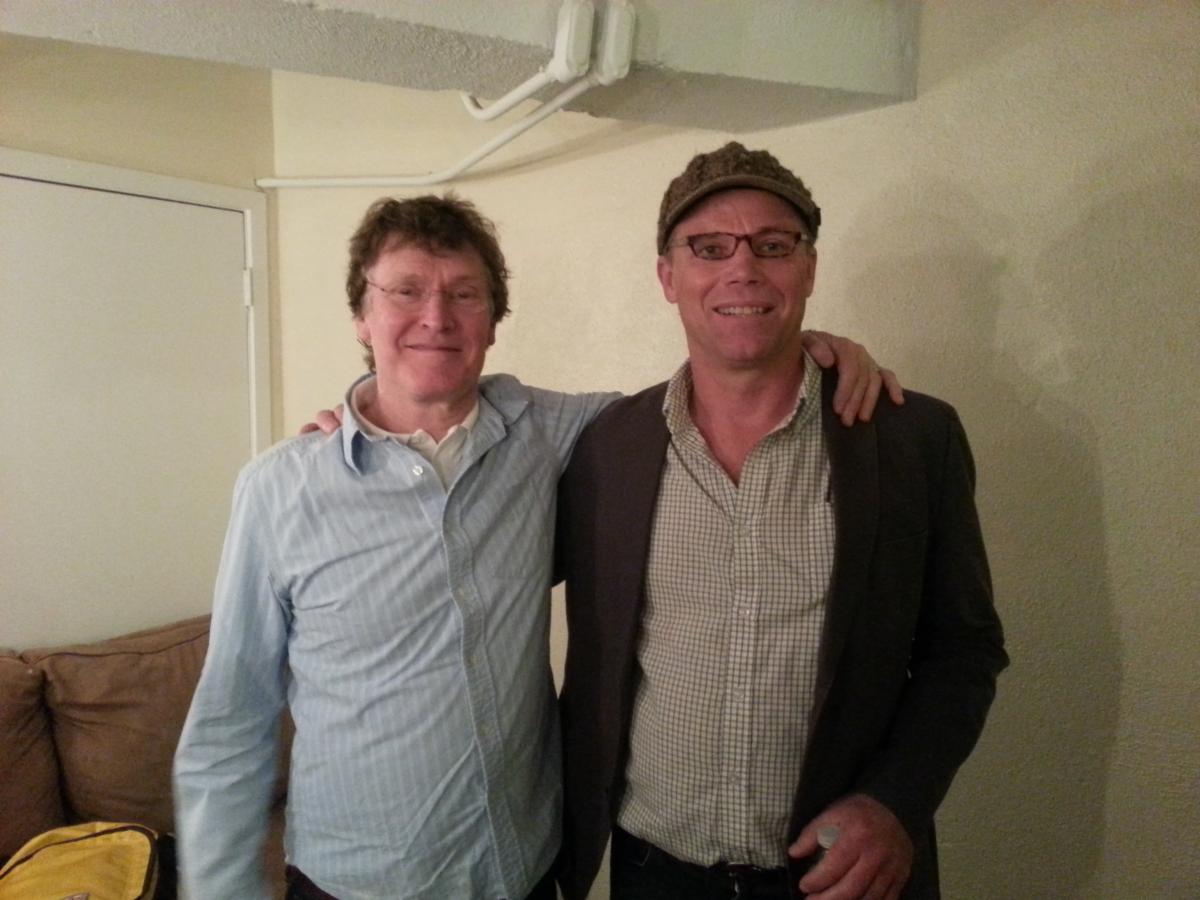 2012
Rock and Roll Hall of Famer, Steve Winwood (Traffic, Blind Faith) invites Jim Turner to a Denver concert after buying an Optibike for his band manager James in England
Band Manager, James received his Optibike as a birthday present from Steve and uses it to commute the 16 miles to the studio each day with 2000 feet of climbing. Lots of days of rain and drizzle as it is England. 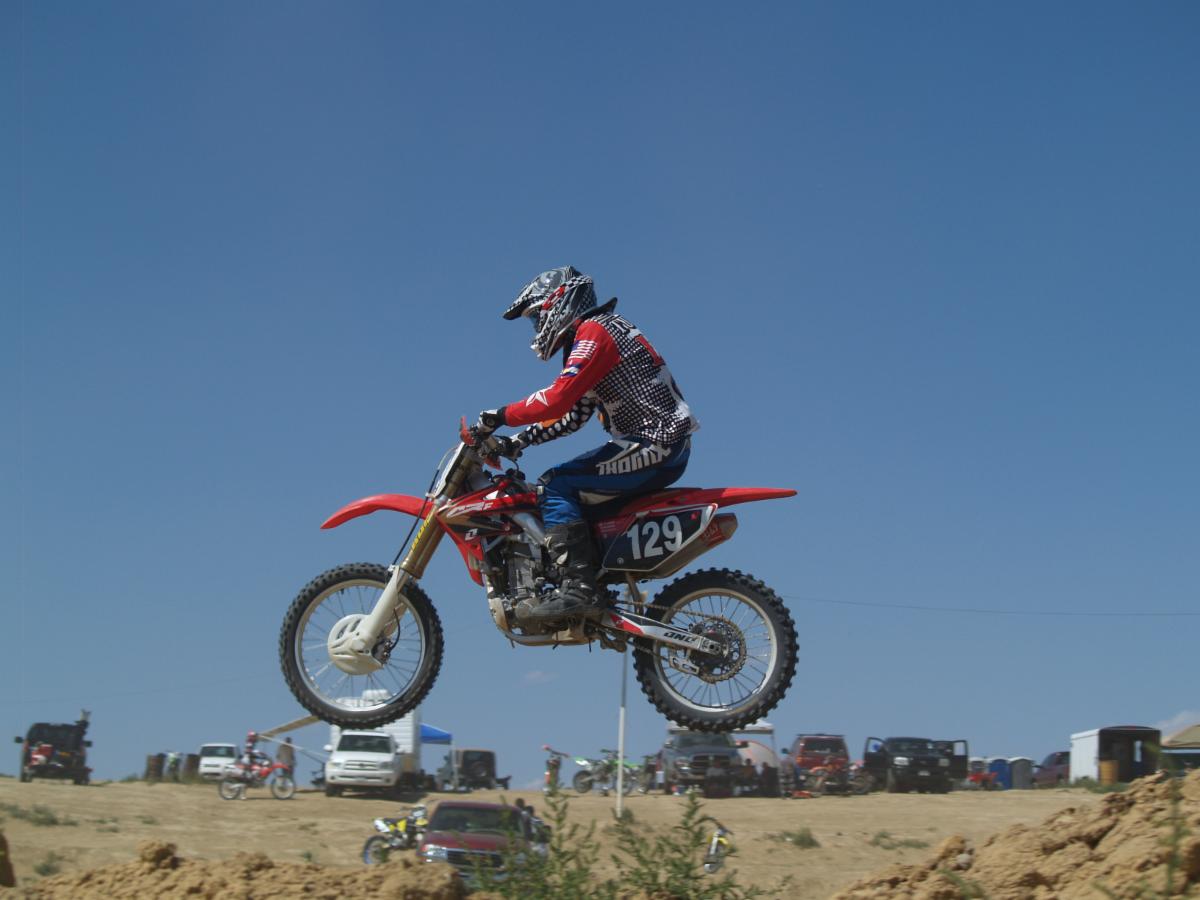 Racing motocross again reaffirmed Jim's belief in how the excitement of riding an Optibike is an exhilarating and simple to do alternative to racing. 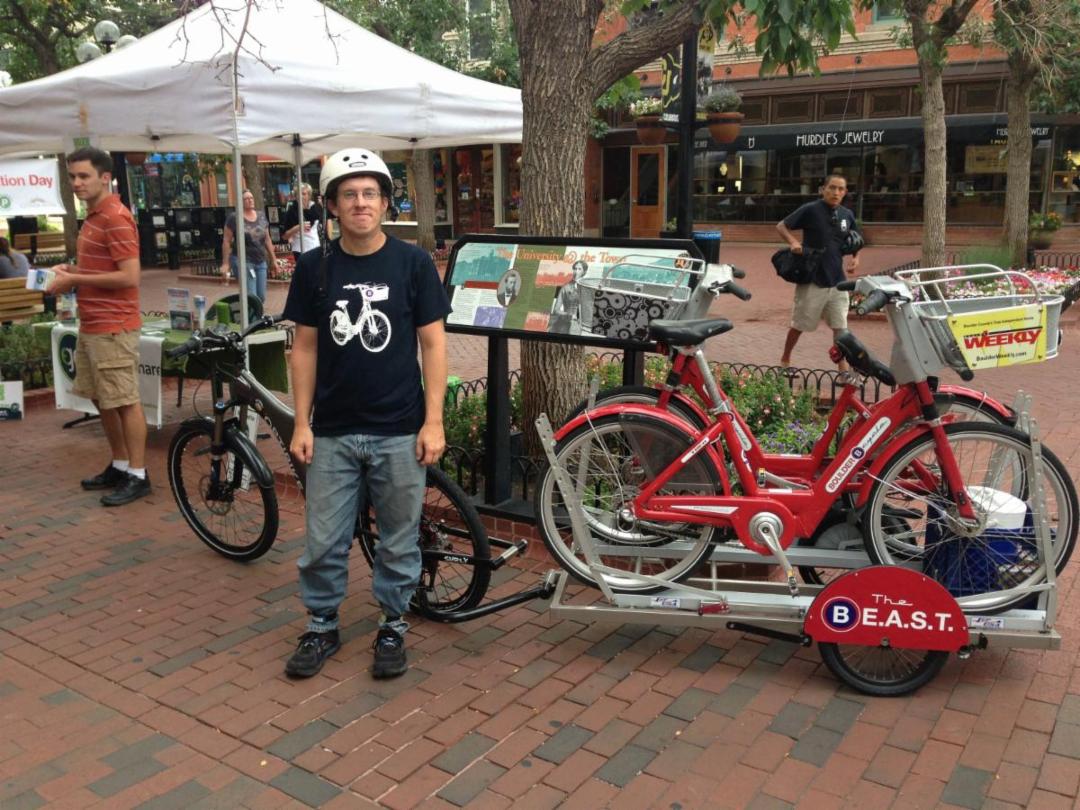 2013
The Boulder B Cycle Bike Share Program teams up with Optibike
The Optibike will be used with a special trailer to re position the B cycles from one station to anther during the day.

The Optibike has the power required to carry up to three B Cycles from one station to another and eliminate the use of a pickup truck.

Previously a regular bike was tried with the trailer, but this proved to difficult to pedal. The B Cycles must be continuously moved from one station to another as riders drop them off. One station may become full, while the other becomes empty. 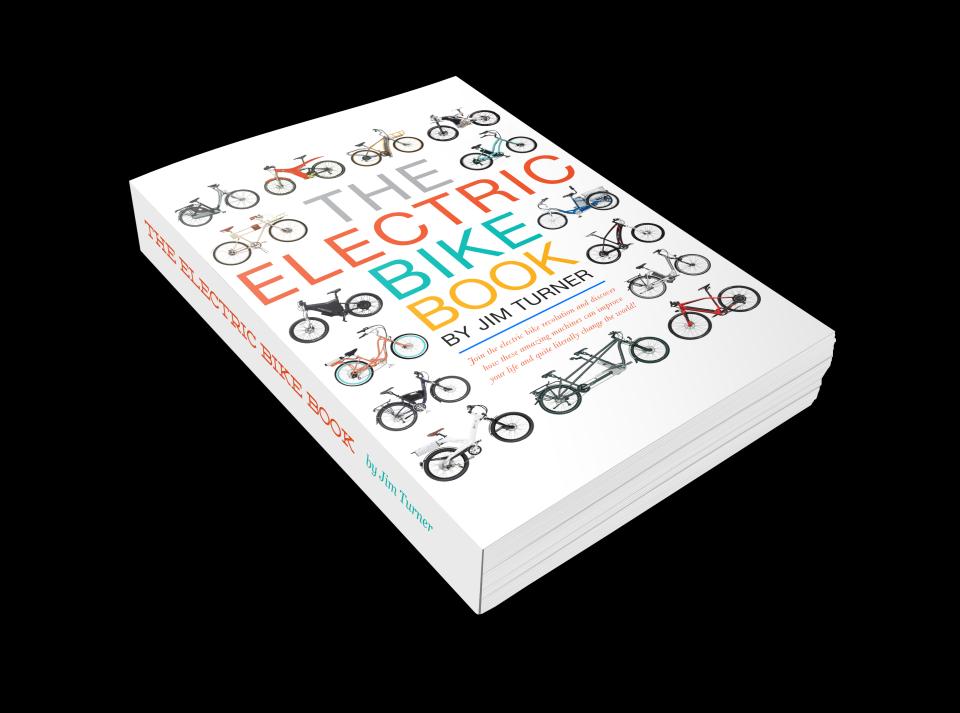 Watch the Trailer and Get the Free Book 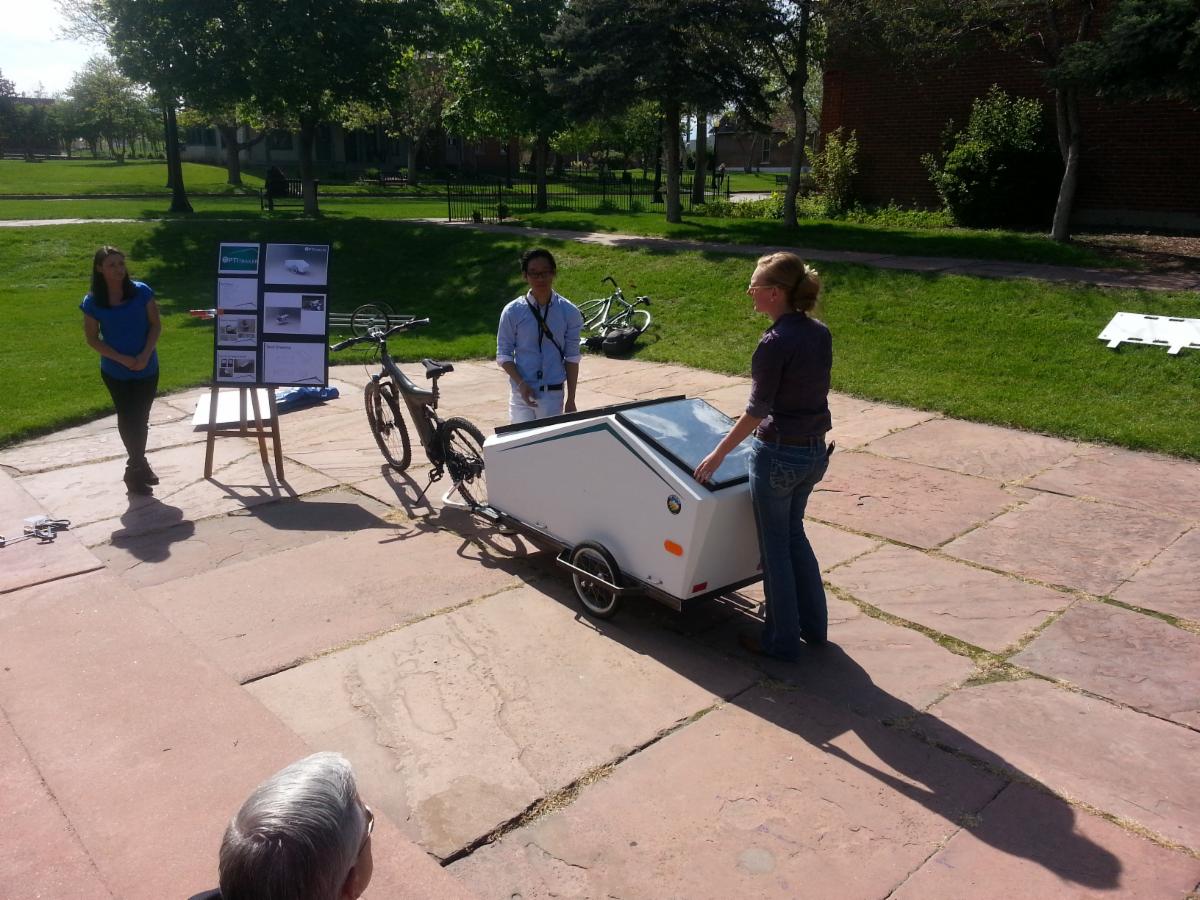 The BERT trailer is designed to by pulled by an Optibike R series bike. The power of the Optibike allows the trailer to be pulled with weights up to 250 pounds for up to 100 miles at speeds of 25MPH.

The Optibike R series are the only electric bikes with the power and durability to be able to accomplish this. The R series Optibike makes the concept of BERT a reality. 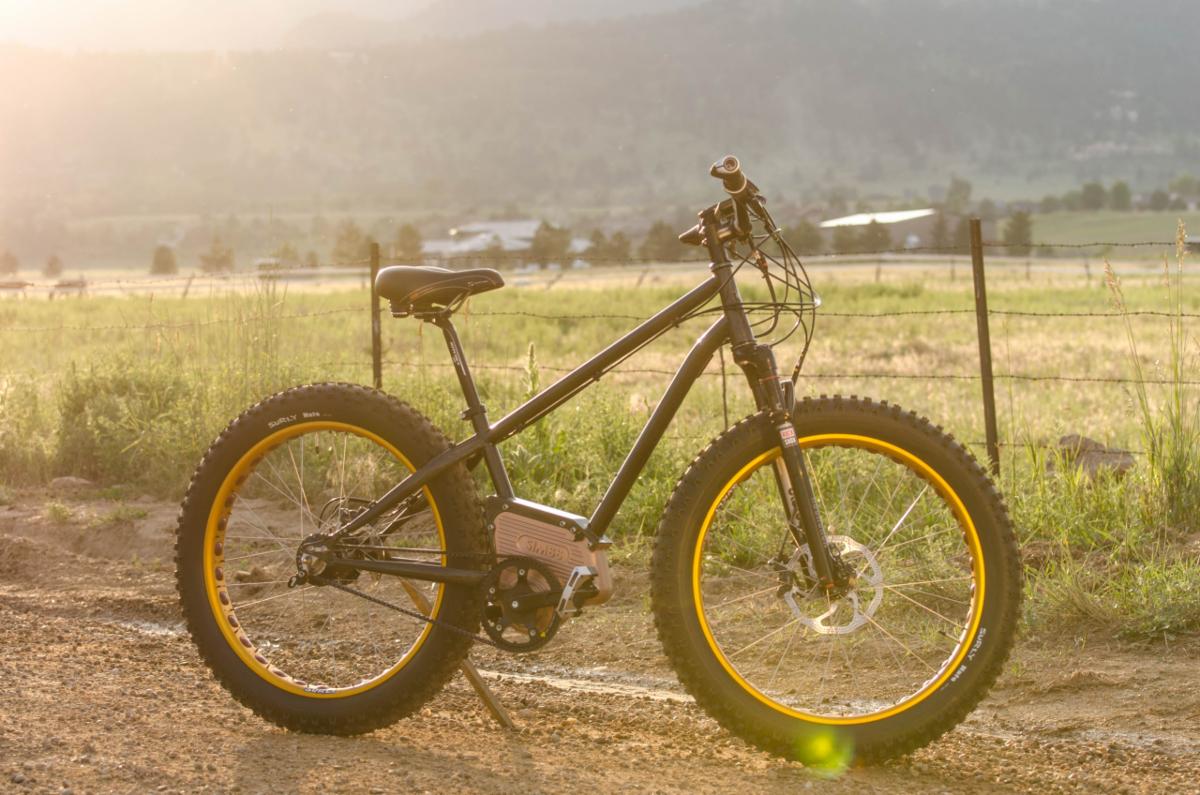 2014
Revolutionary SIMBB (Super Integrated Motorized Bottom Bracket) released.
Optibike releases the new SIMBB which has the motor, controller and battery packaged together to make the smallest E bike drive system in the world. It is so small that when one competitor saw it, they said "But where is the battery?" 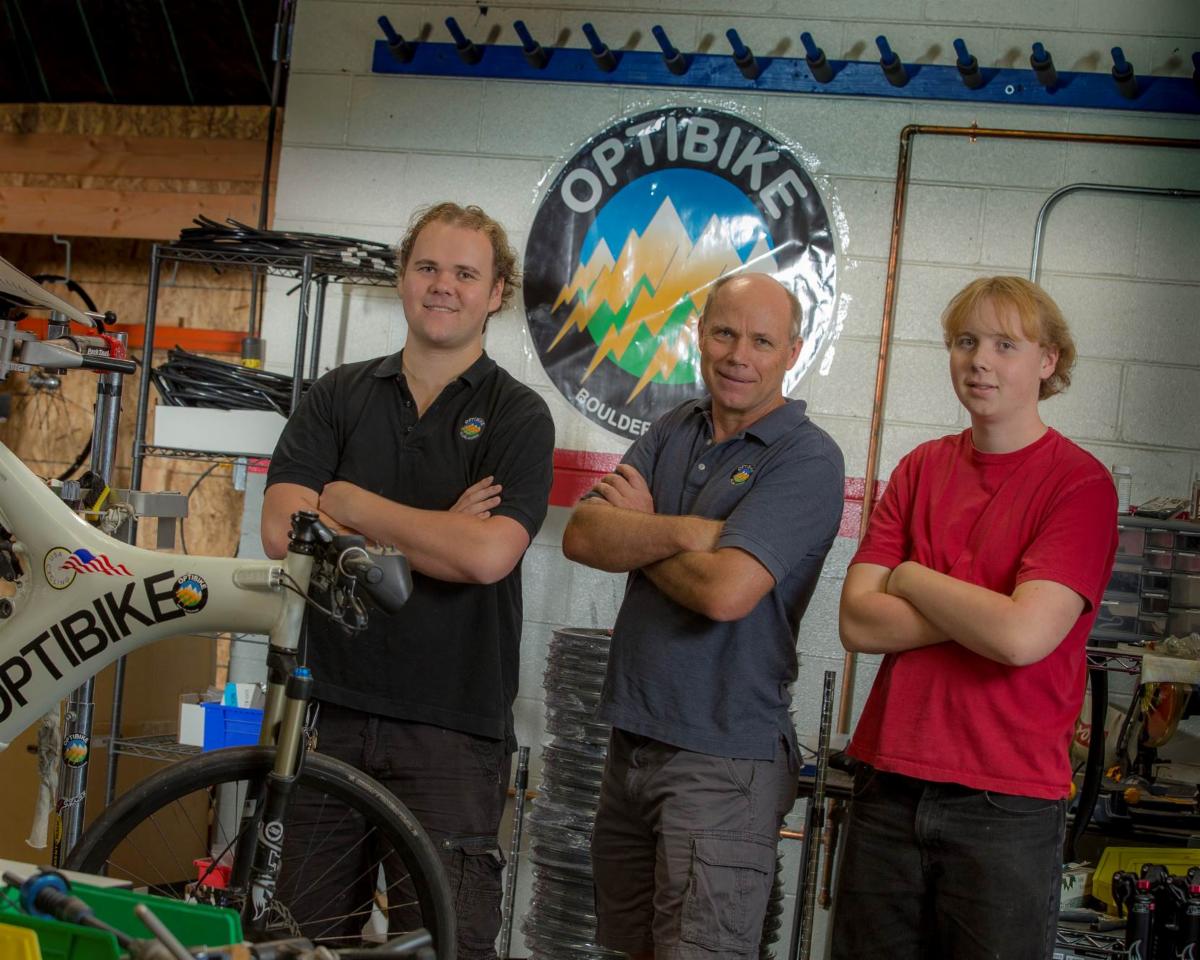 2014
Second Generation of Turners Join Optibike
Jim's sons Nicholas and Austen grew up breathing electric bikes and in 2014 began working in the business full time contributing their unique knowledge and skills to develop the next generation of Optibikes.. 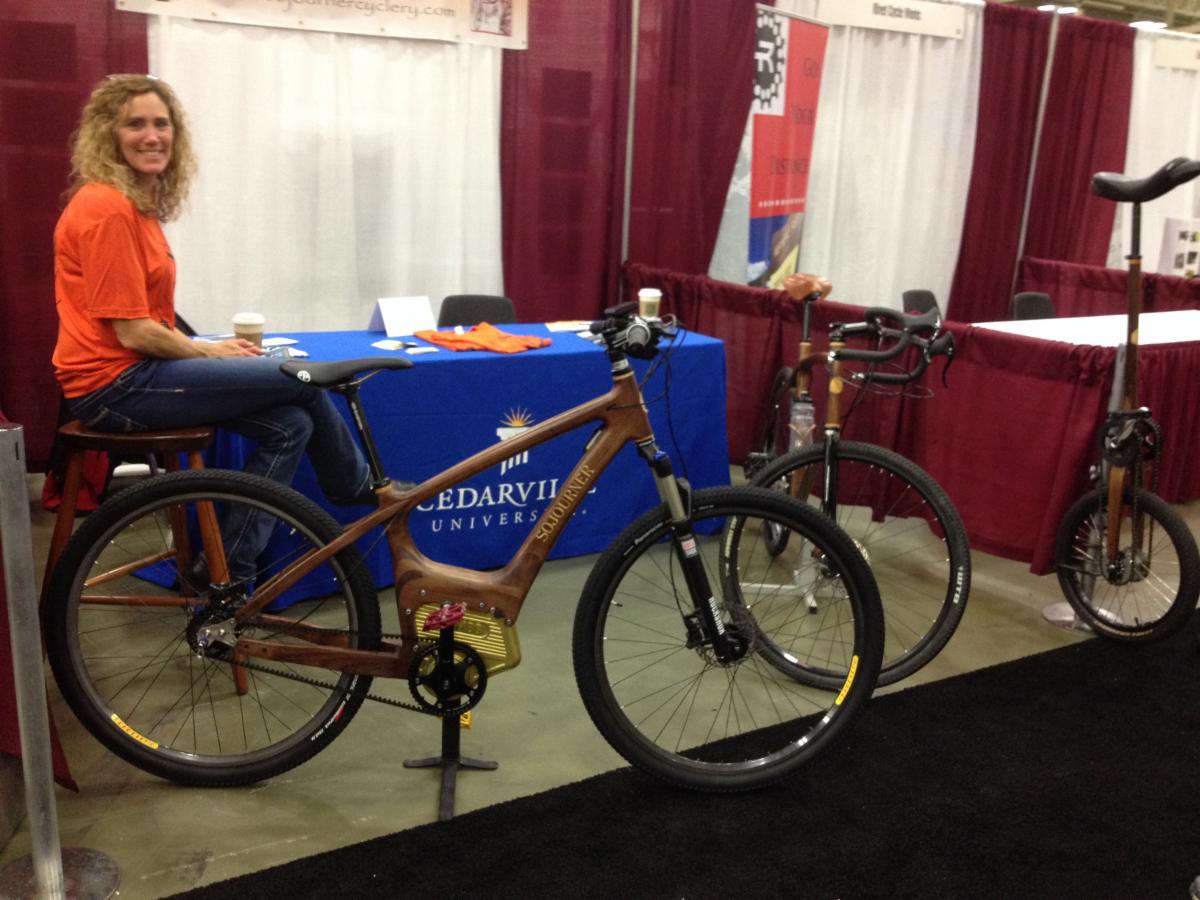 This beautiful hand built frame was made from hard wood and sanded and polished by hand. 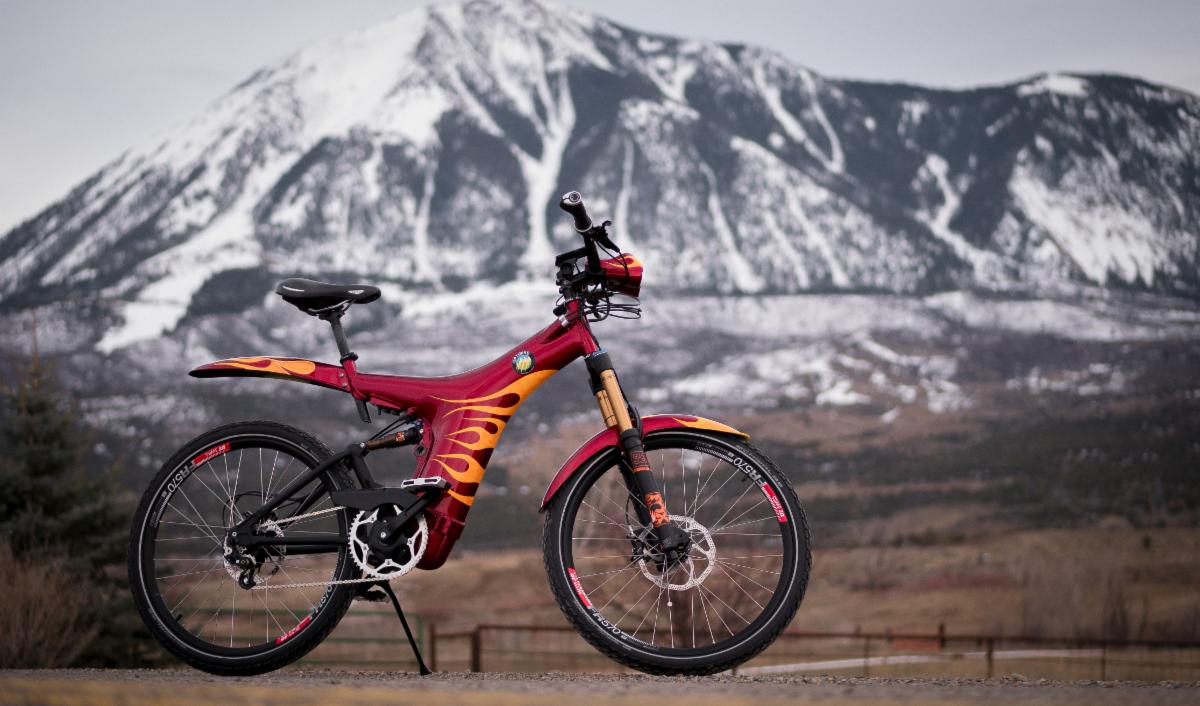 2016
R15 Released
All Optibikes are fun to ride and have their own personality, but none put a bigger smile on a riders face than the R15. The acceleration and high climbing ability of this bike is unmatched and has amazed all the customers who have upgraded from their R11.

The R15 has industry leading performance with 1500 watts of continuous power, 175 Newton Meters of torque and a 48 volt 22 Amp Hour (1056 watt hour) battery that weighs only 11 pounds.

Compare these specifications to the original Model 400, 10 years ago, and it is clear Optibike has evolved by leaps and bounds. 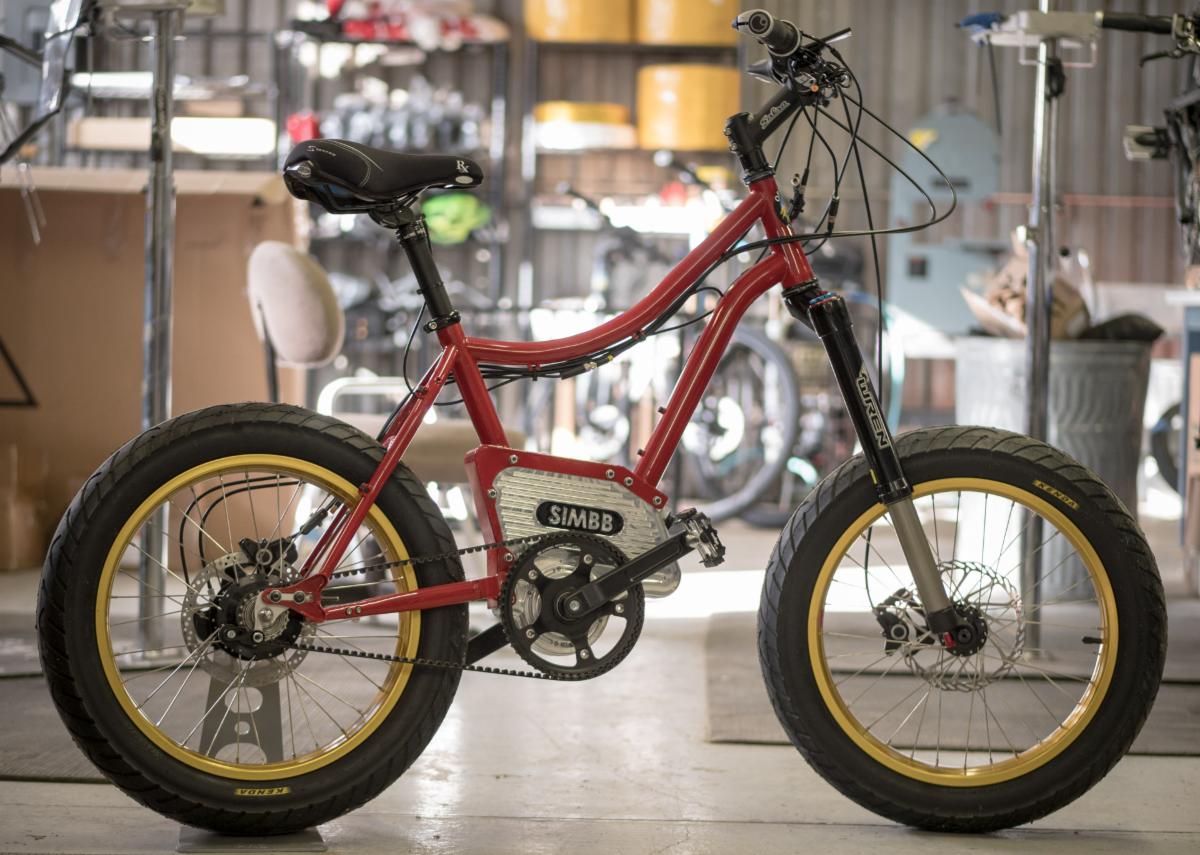 2017
Mini SIMBB Released
Optibike releases the Mini SIMBB. The first high performance electric bike built for smaller people. (And we found loved by every rider). This bike has 750 watts of continuous power and a 37 volt 21 amp hour battery!! The unique SIMBB design lets the small frame size with big performance possible. No other bike can come close in this small package.
You must log in or register to reply here.

C
No longer using the Creo for road riding
2