Playing with the Aventure's gearing.

When I got my Aventure one of the first things I noticed was the highest gear was weaksauce, and the lowest felt way WAY too low for me. The proverbial feet going like crazy to give my ass a ride.

So I put the largest cheap chainring I could find that fit around the chainstays, a great big old 53 tooth.

It confirmed a suspicion, and the past few months has proven me wrong on another.

The confirmed suspicion is that the highest gear ratio was indeed too weak. 46:12 on a 750 watt motor came up short which is why my feet were going like crazy at the top speed instead of a more comfortable rate. 53:12 was better, but it felt like there was still a hair more wiggle room.

Where I was wrong was on the low end. And I discovered this the most painful way -- accidentally running the battery out because I got lost on a path I don't normally take. Unpowered -- something I really hadn't done with it to that point, 53:32 is not conducive to an enjoyable ride on a 70 pound bike with the drag of the motor on it. 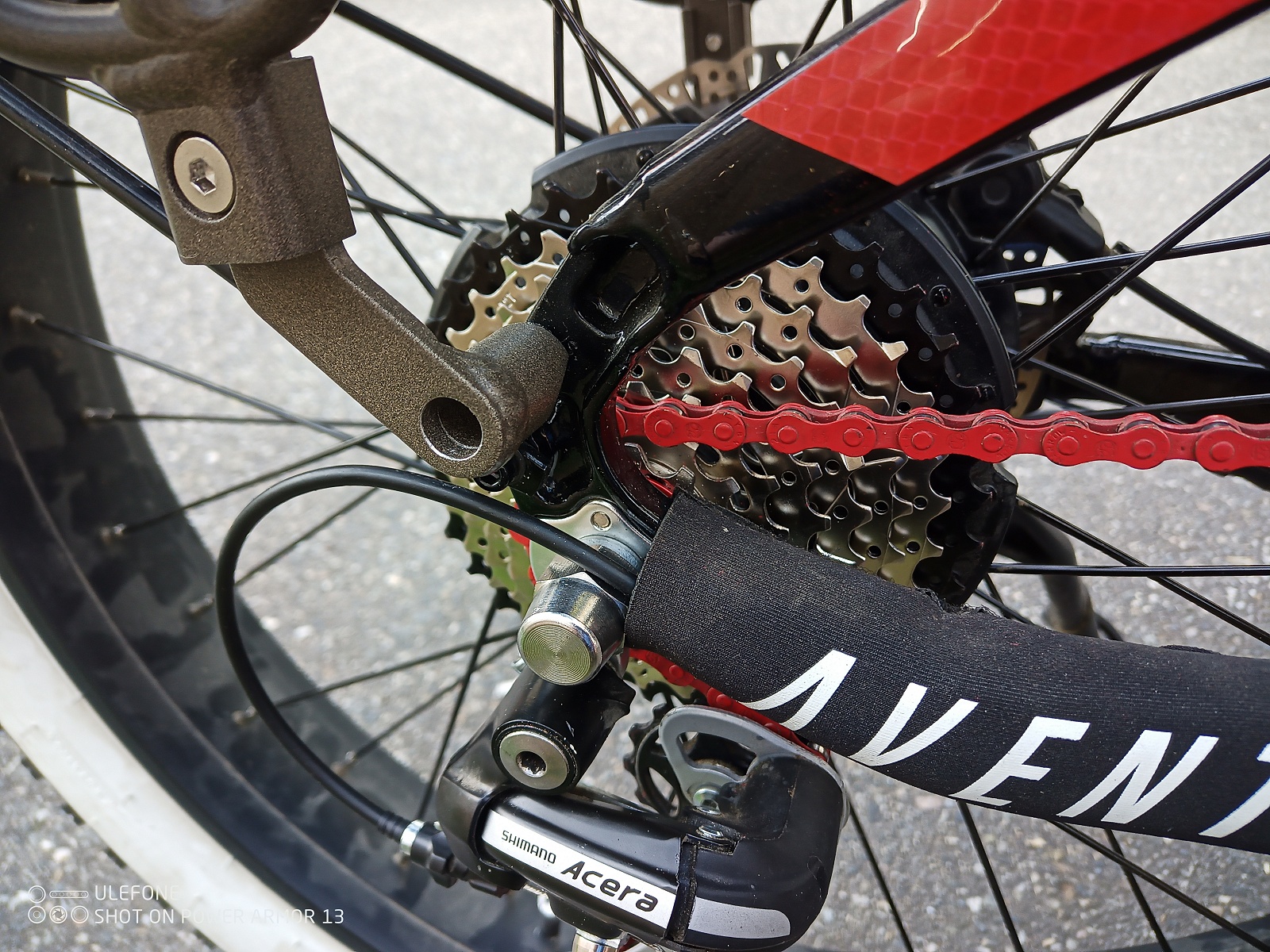 Which took a bit of finagling. Somehow the derailleur got out of whack -- one of many bike technologies I have trust issues with -- but held off on straightening out until the new cogset arrived. Because it's a tech I generally avoided and only ever had headaches with as a kid, and my being 20+ years out of date on bike tech, I tried just generically playing with the limits and adjustments, and very quickly made things worse.

Giant shout out to ParkTools for their instructional videos. Normally I can't learn from videos, but theirs was concise and "lacking in ego" enough to actually figure it out. Their "start with the low limit" approach worked like a charm.

The biggest hurdle was that the Acera is only really rated up to 34 tooth cogs, but the extra diameter was easy enough to get working by simply inserting the B screw the whole way. I have a couple derailleur hanger extensions in my parts bin, but I didn't want to resort to that if I didn't have to as that too seems a bit... sketchy... Just more possible points of failure. I also think my swapping the large 13 tooth plastic cogs on the derailleur for 11 tooth aluminum ones gave enough extra spacing for the larger cog.

I didn't up the chain length yet, as I wanted to test it more before I started playing with other factors. Easy enough later on since I've got those two master links in there and a bin-full more. I have this horrible habit of doing everything in bulk. 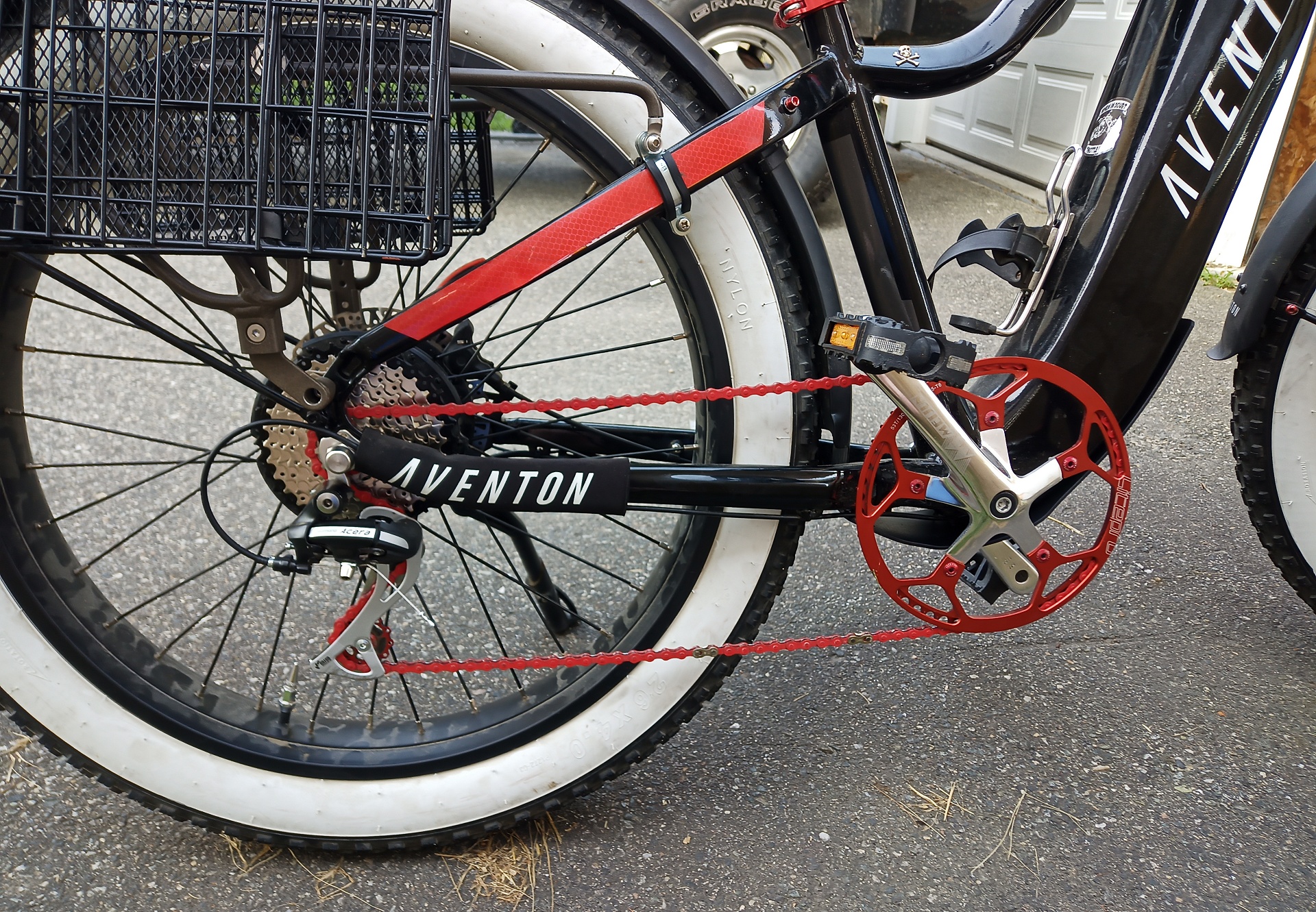 Wow, I really need to clean my rims. Pic taken straight after the test ride.

You can also see how I also swapped out the cranks for aluminum 170mm. Their website claims it comes with 170's... bullcookies. But that's like the "forged' cranks mine came with I swear are cast pig iron by weight alone. Much less the flash lines and casting sand texture.

I ran it up to top speed -- a nice clean 35mph -- and I still wasn't really struggling, but at least it still felt like there was tension on the cranks meaning I was going more muscle than motor. Which honestly is to me what an e-bike should be, even in the highest assist. It's called assist after all.

I also test rode it a quarter mile power off, and 53:36 is way better than 53:32. I could do that for miles if I had to. Which is good since I'm thinking on building a camper trailer and going a wee bit further out into the world.

I also took the time since I had the bike flipped over to put one of the aftermarket skid plates on it. 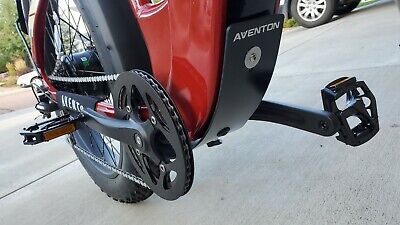 Aventon Aventure Skid Plate MADE IN USA The Original | eBay

This skid plate is made from. 125 thick aviation grade Kydex. Their product is plastic (not Kydex), and shorter in length.
www.ebay.com

Which went on easy. Really well designed and thought out, even if the zip ties holding the rear are a bit sketchy when the bolt for the rear fender could have done double-duty just as the controller bolt-down does at the front. It's nice to cover up all those exposed wires on the bottom of the frame, which is IMHO one of the weakest points in the Aventure's design.

Overall it pedals smoother than it ever has -- that's probably just dialing in the limits and index -- and so far at least the gear range feels more natural and fits my riding style better. And since the second highest gear is 32T, in PAS 3 I can do the nice leisurely 18-20mph I had gotten into the habit of when trying to go longer distances.
Last edited: Jul 19, 2022

I noticed the same thing at the high end. No resistance. I went with a 52t front chain ring. https://www.amazon.com/gp/product/B08NXD3T5D/ref=ppx_yo_dt_b_search_asin_title?ie=UTF8&th=1&psc=1
I've been looking for a different cassette for the rear where did you you find your 11:36?
What are your thoughts on going to a 152mm crank arm? Will I be sacrificing too much top speed for better clearance when pedaling in the corners?

Stick369 said:
I've been looking for a different cassette for the rear where did you you find your 11:36?
Click to expand...

https://www.amazon.com/dp/B09DKN9SJP
Cheap but it's something that's kind of hard to screw up in manufacturing. Fit on perfectly with no hassles.

That seller has a whole slew of different sizes and gear ranges, the 8 speed 11:36 was spot-on.


Stick369 said:
What are your thoughts on going to a 152mm crank arm? Will I be sacrificing too much top speed for better clearance when pedaling in the corners?
Click to expand...

Crank arm length is a very personal thing. Personally I can't ride short crank arms, they don't line up with my strength or desired "cadence" -- despite my being 5'4" tall. In theory I should be on shorter arms due to my height, but it just doesn't work for me.

You might have different results. One thing I like about amazon is that they're very generous with their return policy, so you could try getting a pair from them, seeing if you like it, and if not back it goes.

Don't even get me STARTED about the weight. 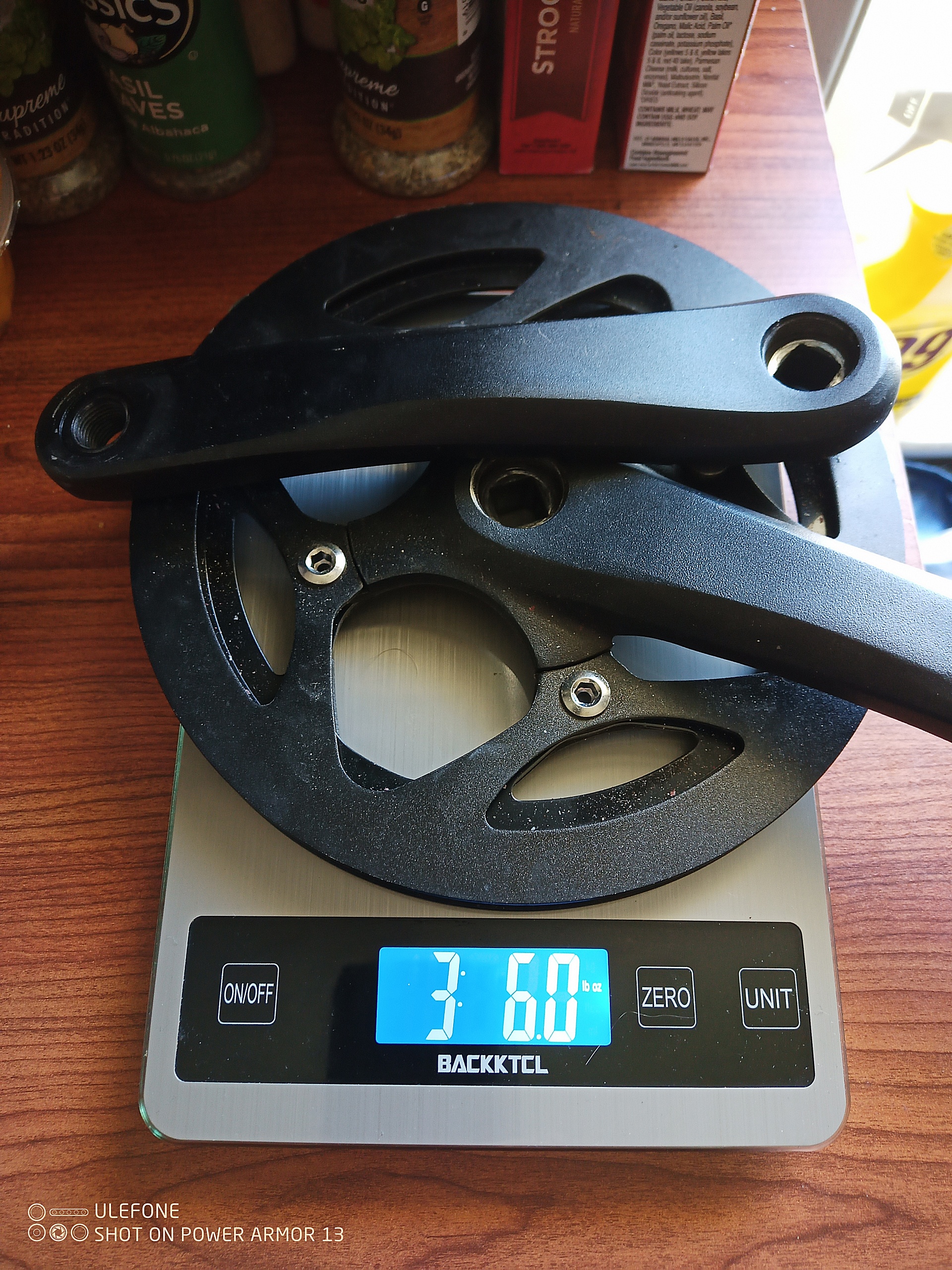 I also think they play fast and loose with the word "forged" since they have the sand texture and flash lines of being cast. Not that you can't smack it around after casting, but... no. It's bad when you take 2.5 pounds off a 70+ pound bike just by swapping the crankset and chainring.

I tried the 152mm arms for a bit but ended up going back to the 170mm. I also went with these crank arms due to the pedal thread on the stock arms getting chewed up. My left pedal backed out and before i noticed the thread was destroyed. Thank god for throttle.

I still have the 12:32 stock cassette and I'm thinking about the 11:42 in the link you provided. I also went with a 52t front chain ring.

I went 11:36 and that's two more teeth than the stock derailleur is meant to handle, thus my having to wrench down all the way on the b-screw. To go up to 42 you'll either need a longer derailleur, or a derailleur hanger extension to lower it to make room for the larger cogset.

I'm probably adding the hanger to mine today because it's a bit sketchy dropping into the lowest gear even when "properly" adjusted. Though I'm tempted to get a better and longer derailleur with a clutch, just because I've had a couple slop-drops the past week. Once crossing a culvert sticking up in the middle of a dirt path, the other at a pothole. I mean that's typical for rides after heavy rains given how things wash out in these parts (it is a valley after all) but I'd rather take the precaution.

Though dealing with chain drops is another argument for the superiority of waxing. Bare hands, come away completely clean.

The Acera isn't a horrible derailleur for road / prepared path use where there are smooth transitions. Unfortunately smooth transitions between road and dirt, road and paths, road/paths and bridges, even road and road aren't really a "thing' here in Keene. Much like how many of the "prepared" paths -- like the Cheshire trail south towards Troy -- haven't been properly cleared or filled in five or six years, with nature taking them back over. Just crossing the college campus here at 12-14mph was enough to bottom out the stock fork... and giving 100mm of travel (out of 120) on my replacement.

I think Aventon knew this about the Acera, hence the free chainstay protector... it's little details like that which make me like their product, even if the support is basically bupkis.

Stick369 said:
I tried the 152mm arms for a bit but ended up going back to the 170mm. I also went with these crank arms due to the pedal thread on the stock arms getting chewed up. My left pedal backed out and before i noticed the thread was destroyed. Thank god for throttle.

This has been a very helpful thread. I have only had my Aventure for a little more than a month, but going up to a 52T front chainring is what I needed for the type of riding in my area (mostly flat, dirt/gravel trails/surface streets when I have to) and the problem of wishing I had one more up shift.

I also ordered a 122 link chain to go along with the larger chain ring, but that still seems a bit short even though i am able to make the shift to the highest cog. I am ordering a second chain so that I can extend the chain length appropriately. If I had gone to a 50T front chain ring, that might have been perfect.

I am not going to mess with the rear cassette until I get more miles on my bike and can figure out what would make a difference.
You must log in or register to reply here.

Did a tire swap, and the brakes flaked out.