Hello
I want to make my regular bike electric
And I have a question.

can I use the existing gear sprocket on the rear cassette to put a chain on going to the motor.or do I need a separate drive gear
Thanks.marco

Marc02 said:
can I use the existing gear sprocket on the rear cassette
Click to expand...

What are you going to use for the motor; mid-drive, or rear hub? If you use a mid-drive the answer is yes. If you use a rear hub you have to make sure the hub is mechanically compatible with the cassette........i.e. threaded, keyed, number of sprockets 7/9/11.

Sounds like the Marco is using the kits based on the my1016 motor. I've never seen one, but pictures show they can be mounted on either side of the rear wheel, but you have to have a freewheel gear for that side, and your bike's drop out width needs to be wide enough to fit the extra gear.

In the USA, these used to sell on Amazon for about $100 USD and most of the kits were designed for single speed hubs. 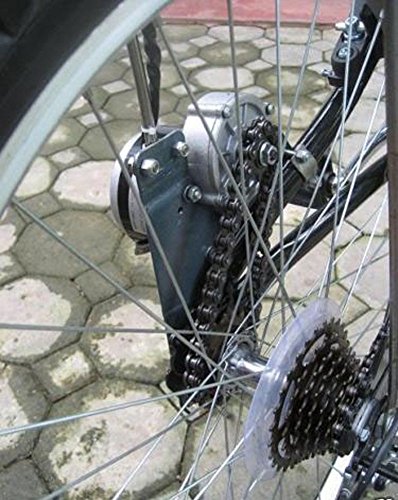 Bing originally found me a "bike motor" that acted on the existing chain between the crank and the sprocket at the rear wheel. It was about $350. While worrying about tooth skipping due to slack, especially with a derailleur rear set up, I discovered other options including powered hubs, and mid-drives that acted on a separate chain and sprocket added to the crankshaft. I now find the original finding overpriced and probably unreliable. It would put undue wear on the chain, as does to a lesser extent mid-drive.
I purchased a powered wheel, for $200, with no involvement with the existing chain or derailleur. It is on the front wheel. So far so good. I did re-inforce the front fork with external aluminum angle, to avoid bending or twisting. The fork is braced against the handlebar, and the angle carries the battery for better traction.
You must log in or register to reply here.

P
About the cassette?