The local county tar & graveled the previously nicely paved road that I live off of. Within 2000' of riding on the new mess, I got a flat tire due to a 3/4" long knife shaped rock. So I need to get a new tire, tube and I'm going to add Tannis while I'm in there. In the process of all of this, I dropped the bike, and the front fender support snapped where it clamps around the Fox fork. Does anyone know if this is a R&M, or Fox part? Is there anywhere that I can get a parts diagram for the bike so I can figure out the part number and order it from whoever makes it?

This is an SKS part. They're really nice folks, if you contact them directly they may even comp you a replacement.

JVBulman said:
This is an SKS part. They're really nice folks, if you contact them directly they may even comp you a replacement.
Click to expand...

Perfect, found it based on that, and Amazon has it in stock. I'll have it Monday.

Hate to see that. I hope the Amazon solution works!

So the part arrived, but it doesn't fit. I got https://sks-us.com/collections/fend...s-for-mounting-fenders?variant=33875806191748 in the 40-43mm size. According to my micronmeter the forks measure 43mm. But as you can see they are quite a bit too small. I figured they just sent the incorrect size, but the part does have 40-43 mm embossed on it. This part like the pictures on their site looks quite a bit thicker then the original (which seems good if it would fit). I don't see any other fork clamps on SKS's site. @JVBulman any ideas? these work well on any diameter fork 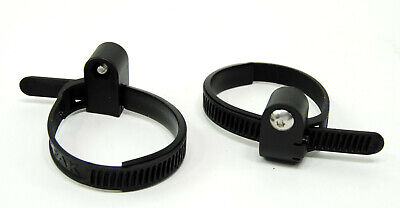 Weird. I'd expected them to send you the part @Alaskan mentions above - never even seen the fix diameter ones before.

So I emailed SKS' US branch and asked them. They said that the OEM part that I have is something specific to the OEM German di vision, so to get an exact replacement I'd need to go through R&M. But that the 40-43mm part that I bought should work just as well on my forks. They gave me a couple things to check, and it turns out I'm a dodo and they will work. First I was trying to install them about 1 clamp width above the old clamp's location. I didn't see it, but on one side the factory fork sticker was under the clamp making it a larger diameter. Second, the nut that was in the new clamp (I had only tried one of the two clamps) was not bottomed out in the clamp, and slightly crooked because it wasn't bottomed out. Once I straightened and bottomed the nut out, the clamps do work with my forks. Now that they do work, I much prefer the new part vs the old one. It's like 3x the thickness, and is clearly not going to break nearly as easy. Since it was a 2 pack, I went ahead and replaced the other non-broken clamp.

Thanks for your help everyone.

So the fork tapers towards the bottom? So I had to check this out myself and then I found a rebound adjustment. What the heck! My dealer didn’t mention this. The location is on the very bottom (end).
You must log in or register to reply here.

Which tires come on 2021 Superdelite GX?