Show us pictures of where you ride your ebikes!

I guess I’m the only one slaloming through the highway exits and interchangers...

Maybe I should make my own thread: Pictures of ugly places & downpouring rain.

mountaindweller said:
Back from a tour of Holland and Northern Germany , superb cycling infrastructure in place , + lots of space for bikes on their rail trains .
Click to expand...

Great photos of what looks like a most enjoyable bike expedition. It appears your Supercharger carried a heavy load well. Thanks for sharing such interesting photos of your trip.
M

Alaskan said:
Great photos of what looks like a most enjoyable bike expedition. It appears your Supercharger carried a heavy load well. Thanks for sharing such interesting photos of your trip.
Click to expand...

Many thanks, bike sure holds it well, the balance is awesome, especially down hills and getting well over 100 miles per day in Eco mode on superb purpose built bike lanes .
Last edited: Oct 28, 2019

Our bike path has become a canal.

I used to ride thru this kind of stuff for fun, on throttle if it was less than 6 inches and maybe less than a hundred yards, but after having two bikes wash out this summer, it's better to be cautious. Besides, might run over a fish.

No ride yesterday as I was at the motor racing but I have 2 days off and the weather is great for the time of year 63 miles in the Autumn sunshine with 4,100 ft of climbing, my 2019 total is now 3,139 miles, only 131 miles to go to beat last years total Hopefully that will reduce even more tomorrow, I might make it a 50 miler as my legs were tired today...that might change if I'm enjoying myself too much

As I said yesterday, my aim was to cover 50 miles today which I did...50.1 to be exact Back to work tomorrow so the fun is over for now...

The sun goes down at about 6PM. Weekday riding is down to this...

A set of beautiful, youthful, curious Thoroughbred eyes were on me as I stopped for a drink and a rest in Upperville, Virginia. The yearling was intrigued, but loath to leave the fresh patch of grass under his feet, and his older and wiser companions, to come closer. For me it was 26 miles of quiet gravel roads today under a deeply suspicious sky purposely hidden behind an anonymous blanket of thick, featurless gray clouds. It was a touch cold so I had an extra sweatshirt strapped to the top of my rack. Came close to almost putting it on at least twice, it was that chilly. Had on ear warmers, polar fleece gloves, sweat pants over my long legged biking pants, and a sweatshirt under my cycling jacket. JayVee said:
The sun goes down at about 6PM. Weekday riding is down to this...
Click to expand...

Good to be on bike lanes in the dark. Is your commuting entirely on bikes lanes?

PaD said:
Good to be on bike lanes in the dark. Is your commuting entirely on bikes lanes?
Click to expand...

This is a segment where there are several highway exits, west of Lausanne in Bussigny. It is thought to be very dangerous, but there were zero accidents from 2011 to 2017 on the axis going south. This is because that side of the road mostly has protected lanes running on the sidewalks and protected islands with bike lights. The other side of the road has no such protections. There has been one serious accident there. Switzerland maintains a database of where accidents happen classifying them as fatal, serious (requiring an ambulance), or light. So you can always get an idea of whether the roads you’re using are dangerous. Fortunately, there are often multiple ways to get to the same place. So you can avoid the dangerous spots. I used country roads for my commute. I see dog walkers and... lots of other e-bikes.

We were traveling this past weekend but came back to find the oaks putting on a quite a show to end what has been a memorable foliage and biking season. We are in the midst of another rainy, misty stretch of weather. I convinced Marji that we could fit in a ride between downpours. We almost made it! It snowed here in October? Awful. Well, my wife is out of town, so I snuck in a ride before it all melted. I had the wrong tires mounted on this bike, but what the heck. I got thru the grassy part without falling and the paved area was dry. A 33 mile ride today on the rolling gravel roads of western Loudoun County, VA, following the line of the Blue Ridge Mountains. I was hoping to find the bottom of the battery, but instead found my own ... uh ... "limit" shall we say.

Had to bundle up as the temps are dropping now that November is here. Started at 43°f (6°c) so wore warm but lightweight clothing which proved to be golden throughout the ride- kept me warm without sweating.

Stopped to snap a picture of the Blue Ridge vista enroute to Upperville on the same gravel roads that both the Federal and Confederate troops took just hours before their engagement at Upperville. Behind me is the 1870s estate "Pelham" named after the very popular and much beloved young Lt. Col. John Pelham in the Virginia Confederate cavalry who died in action in Culpepper, VA at age 24. In the foreground of this shot is the private training racetrack and paddocks of the estate "Catesby". Once in Upperville I stopped to take in the views of the Civil War battlefield, contemplating the sadness of all those young lives lost on what are now pristine fields that show nothing of what took place 160 years ago. The weather beaten history sign (situated facing west towards the mountain) detailed every nuance of the fighting "for the cause", the results of which led directly to the Battle of Gettyburg, and the turning point of the war. Then onward north to the village of Bluemont, a favorite tourist destination in the mid 1870s to mid 1940s for folks fleeing from the sweltering fetid summer swamp conditions of Washington DC, eager to breathe the "salubrious mountain air" of the Blue Ridge. Nestled comfortably at the foot of the mountains, this quaint town was serviced by the railroad until 1940 when the line was abandoned thanks to the automobile rising in travel popularity, pushing the railroads out of business. The village now is a favorite cyclist "turn around " destination for those eastern suburban cyclists who want to "ride west to the mountains and back", as well as day trippers cruising out in cars and on motorcycles to visit the plethora of wineries and breweries just high enough up on the mountainside slopes to offer a breathtaking view of the valley along with a draft of craft beer or a heady glass of award winning Virginia wine.

It was a very pretty, very serene 2 1/2 hour ride with 40 minutes worth of stops along the way

Tomorrow we will be spending the day enjoying an art studio tour in another county south of us. Quite looking forward to it! My bike can have the day off.
Last edited: Nov 2, 2019

Near the Vancouver airport... a couple of parks I'd never seen 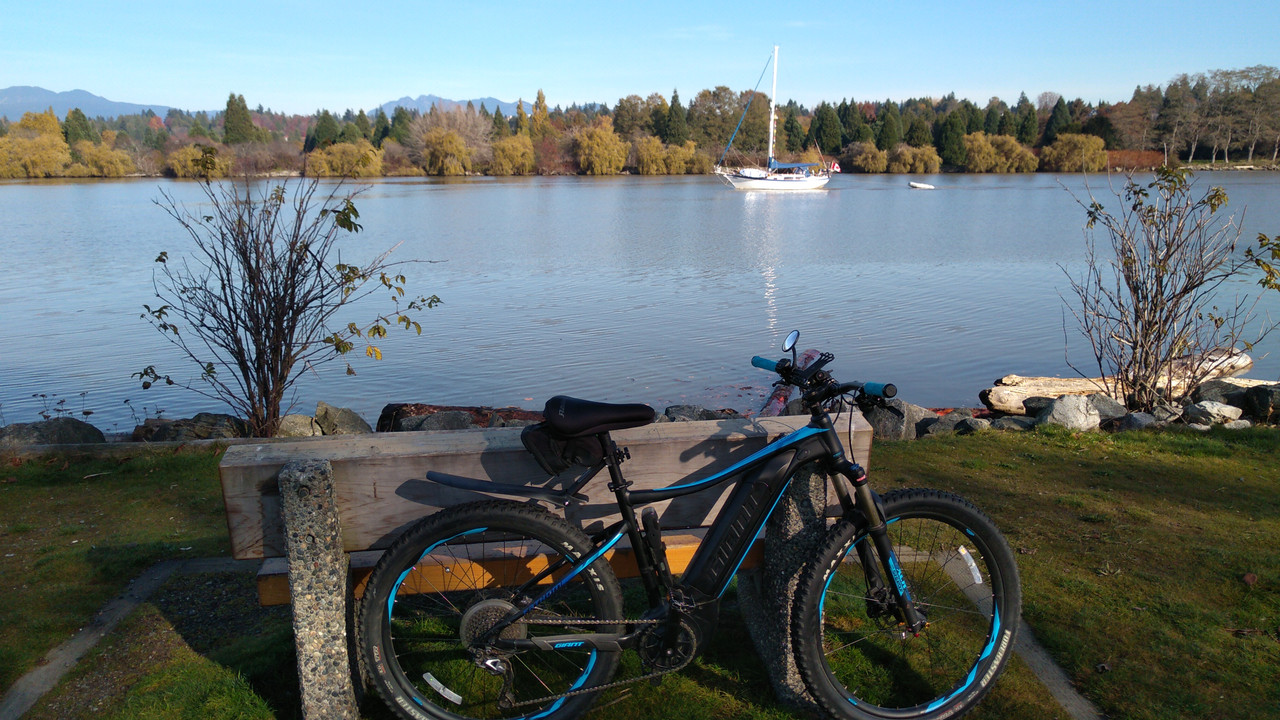 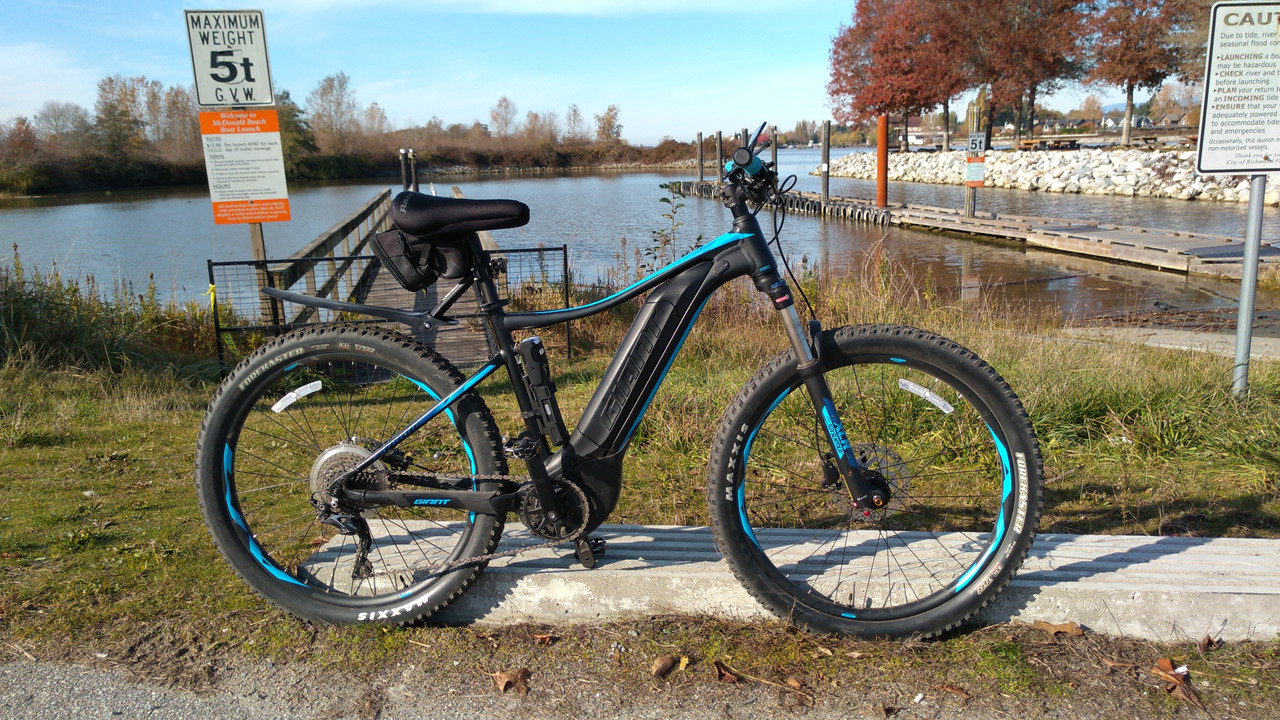 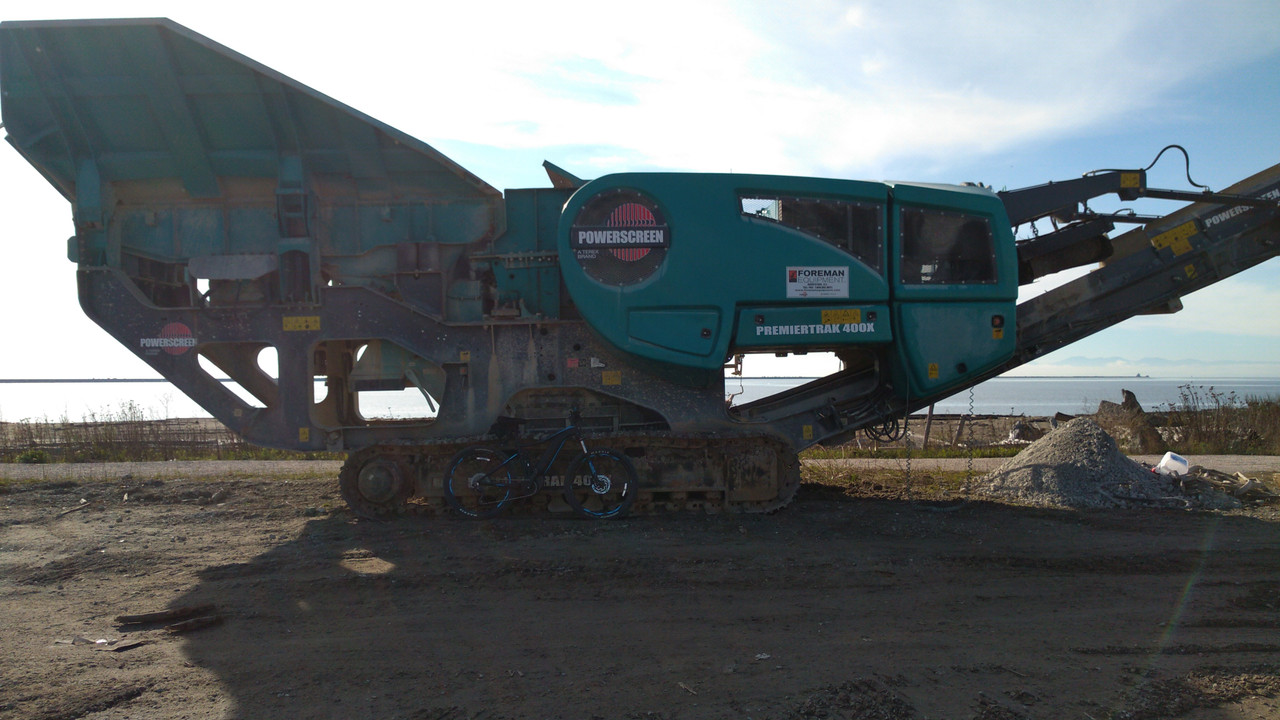 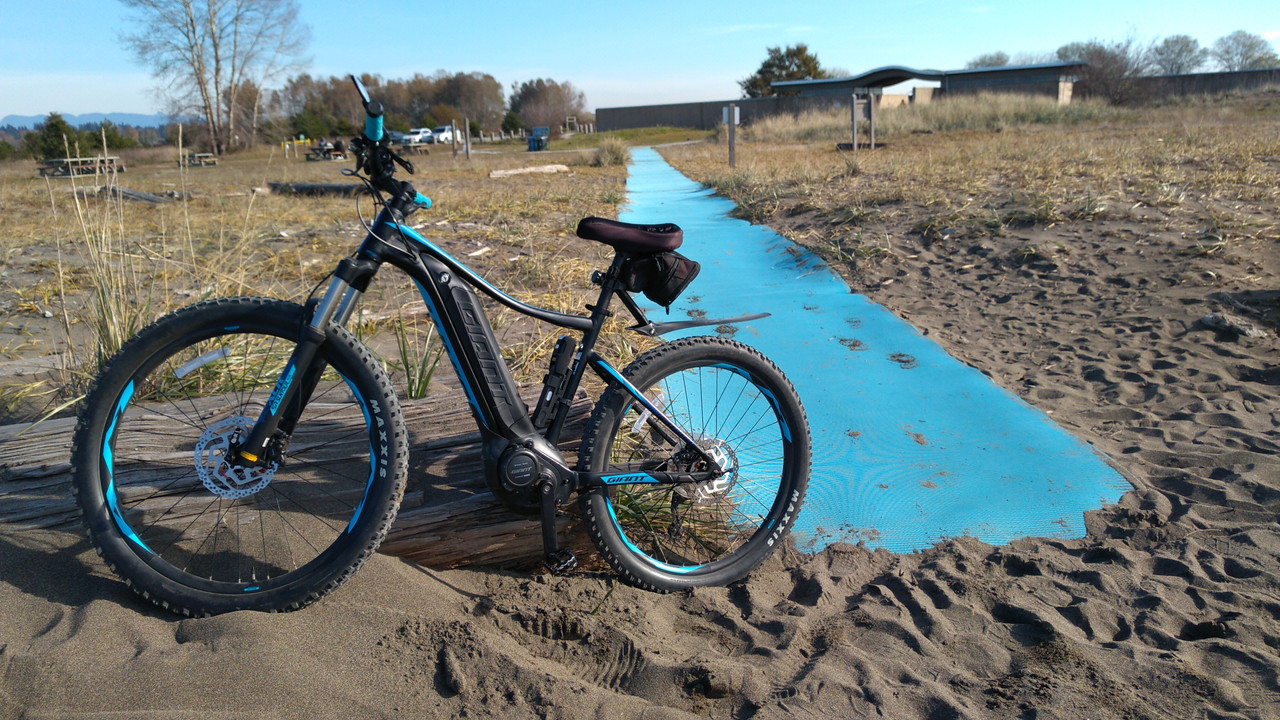 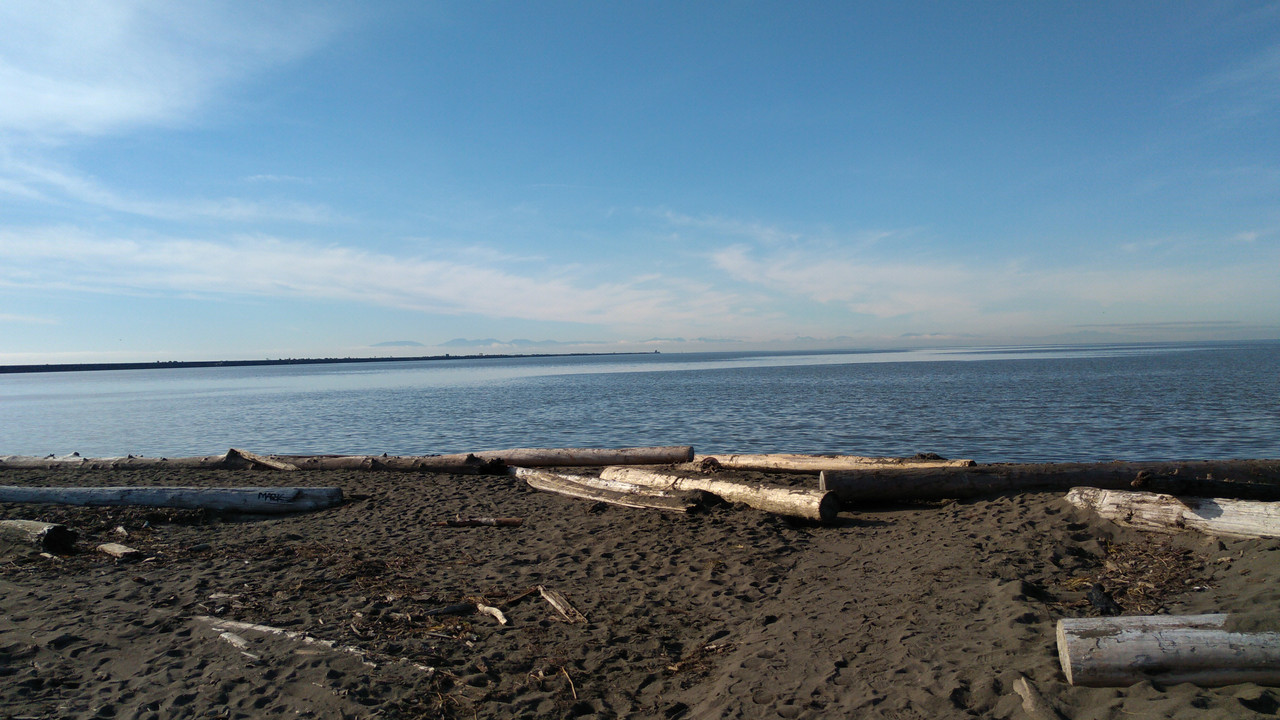 This is the path out on the spit @ Iona regional park 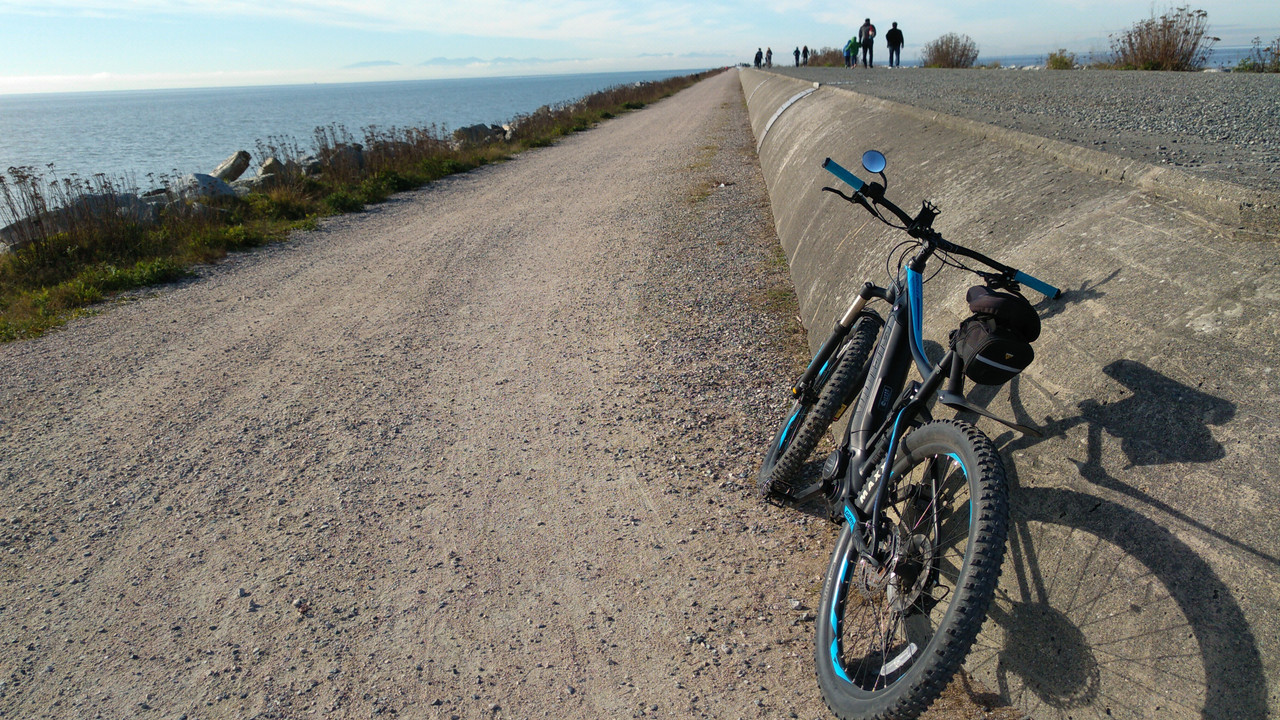 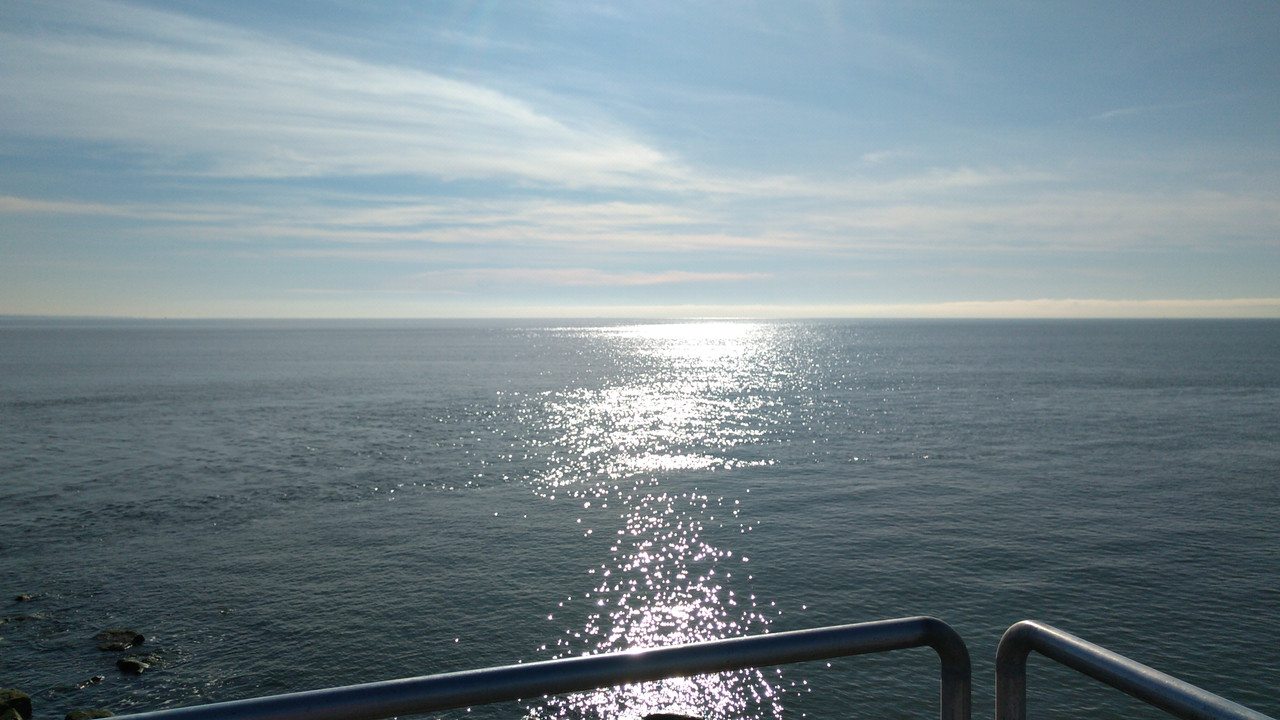 Maitland Woods in Goderich on Lake Huron have some nice trails...

Saturday was reasonably warm at 7-8°C ( 44-46°F) so I thought it could be a good opportunity to lower the voltage of the battery before hibernating the bike.
Put some extra clothing and a cheese sanwich and a thermos with coffee in my bags. Rode out to Drottningholm castle where the king lives. It’s about 9km from my home.

From there I followed a small road down to sea and then a path by the sea. Found a small landing stage where I had my coffee and sandwich in the company of a local seen in my last picture.

Made a short tour on the island before returning home. 29km this day. Got my battery down to under 60% so that would be ok for winter storage.
M

Recent ride past a "pick your own" pumpkin patch. Lots for excitement for the kids.
It was one of the fabulous fall days, but now we are in a stretch of cold day. 30s F (0s C).
Kudo to those cyclists who ride in any weather.
But got both ebike batteries down to around 50%, just in case it's winter storage. After a week of incessant rain I noticed the forecast for today was looking promising so I booked a half day off and I was rewarded with a fantastic 44 mile ride, lots of floods around the back roads but that didn't deter me in any way The bike needed a good wash after it, its looking like new once again now My 2019 total is now 3,233 miles from 55 rides, average mileage 58.78 miles! Another 33 miles and I will surpass last years effort