I need a bike asap for my 8 mi round-trip commute and leisure riding (and my health — I gain weight if I don't bike). I had a cheap Chinese hub-motored e-bike that never worked right from the get-go and is now dead. After testing some bikes I'm down to two...
On paper I'd easily say the Gazelle. But I'm leaning towards the Trek because of service. I work two jobs during the academic year — I work at a university and teach a class on the side to boot. With the Gazelle dealer being 45 minutes away, it could be days or a couple weeks before I'd have time to take the bike in if something ever went wrong with it. The Trek is from our local college town indy bike shop that's only a couple miles away on my way to work. They're good folks with good service. (Though the FX feels about $500 over-priced for the specs.)

A bit more about my daily commute — 4 miles each way rolling hills— up 160 ft and down 50 ft one way and reverse the other. I'm not worries about my commute with the Trek, but not sure about my recreation riding area which includes deep creek valleys so its hard to avoid steeper 7% climbs. That's where I'm wondering if I'd be making a mistake to skip the Gazelle and the extra newton-meters of torque and the larger battery.

Thus I'd accept any wisdom —would you go with local service or a stronger bike on paper with the Gazelle?

Isn't the Trek Allant +7s a more equivalent bike to the Medio T10+ in terms of power, battery geometry and comfort. If the local trek store can get you one of those, perhaps that would be the best outcome. The two bikes are fairly close in price as well. 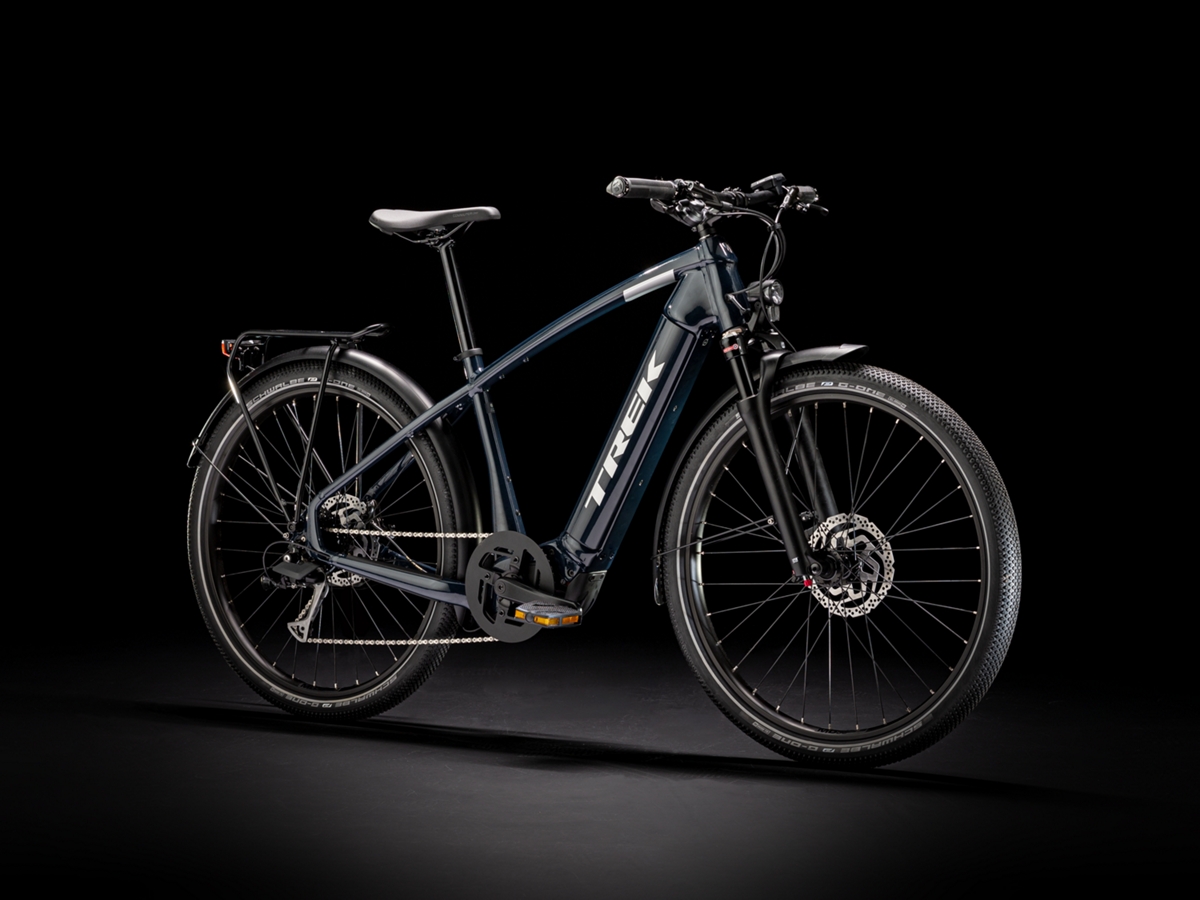 Discover your next great ride with Allant+ 7S. See the bike and visit your local Trek retailer. Shop now!

The Allant 7s isn't available currently near me (I think it's out of production and they 2023 model isn't out yet). I had hoped to get an Allant 8s but the high step didn't fit me as I have short legs and long torso (6 foot but 29 inseam). A step thru 8 might be available in a few months depending on whether they can get the bikes out of Germany. Delivery dates keep slipping due to the war. But I really can't wait that long

That's actually the problem with most of the Trek models. Everything I wanted was at least two of not 4 to 6 months out.

Your choice is tough. I would always advocate using a good LBS. The Trek looks like a good ride but as you said it is a smallish internal battery and a hub drive. Not much torque and am not sure how the FX+2 would handle your hills. Is a Range Extender, an external battery available for the Trek? 250 W battery is a little even for a lightweight e-bike. The greatest benefit of the FX+2 is its light weight. If you ever need to carry your e-bike: don't hesitate and go for Trek.

The Gazelle is a full power mid-drive motor e-bike and it would not disappoint you re performance. The removable battery is a big asset. If you feel you will never need to carry your e-bike, the Gazelle is a good option. Only... that specific model has a 500 Wh battery. By today's standards it is not much; Class 3 e-bikes are energy hungry. If you could find a similar e-bike with a 625 Wh battery it would be a game changer. For a higher price.

The pros closet has a bunch of Allants for sale in various sizes. The Pro's Closet has hundreds of used e-bikes bikes for sale, including electric road & mountain bikes, from top brands like Trek, Specialized, and Serial 1. All backed by our quality assurance program!

Many thanks for y'alls thoughts! I went with the FX+2 and will likely do a review once I have a few weeks under my belt.

The deciding factors for me were the light bike weight, hyper local service that was too good to pass up, and the (apparently unadvertised) Hyena Rider app that appears to let me tweak the motor output for each level. I'm still experimenting with it. At the very least it tracks distance, speed, range, and battery capacity.

So far so good. I've been on it for about 7 miles and it's handling my day-to-day commute hills just fine. The biggest challenge is trying to figure out the right combination of gearing and assist for the various stages of the climb and descent.
H

g33klibrarian said:
Many thanks for y'alls thoughts! I went with the FX+2 and will likely do a review once I have a few weeks under my belt.

The deciding factors for me were the light bike weight, hyper local service that was too good to pass up, and the (apparently unadvertised) Hyena Rider app that appears to let me tweak the motor output for each level. I'm still experimenting with it. At the very least it tracks distance, speed, range, and battery capacity.

So far so good. I've been on it for about 7 miles and it's handling my day-to-day commute hills just fine. The biggest challenge is trying to figure out the right combination of gearing and assist for the various stages of the climb and descent.
Click to expand...

I'm new here and I in the last weeks I've been looking with interest at the FX+2, would you mind posting some comments here about your bike?
For instance, how far have you gone with a single charge? Trek website advertise "up to 55Km" but this bike seems to have the same motor and same battery as the Cannondale Treadwell Neo 2, which is advertised for 70Km, so I'm hoping Trek has been conservative in their estimation.
Since I'm new to ebike and I don't own any, I've no idea how much low is too low for the motor torque: have you had any issue the 40nm of this ebike? is the torque important only for climbing high-gradient hills? My commute, if I ever found the courage to switch from car to bike, would be mostly flat (average 1% with a peak less than 2%) so perhaps this should not be a concern for me.
I've also read a comment by @Richard Stallard (I'll post questions also for him ) about the motor not having a real torque sensor but rather a cadence sensor. This is one of my main concerns. I've tried a "cheap" ebike by Decathlon which whas heavy and only had a cadence sensor: I found it really uncomfortable at low speeds within the store, with the bad feeling of someone pushing me from behind as soon as I moved pedals, even with the lowest assistance; for this reason I've started looking for lightweight ebike with torque sensor and "I fell in love" with the FX+2 but now it turns out does not provide a natural feeling and gradual assistance as it should be with torque sensor. Has this aspect bothered you so far?

Thanks for the feedbacks you'll provide!

hey @g33klibrarian - echoing @hud95404, awaiting for your thoughtful reviews. Torn in much the same way between expensive and cheap(er), nimble and powerful, bike-like and versatile. I rode the FX+2 a few weeks back and was smitten. Thoughts? Thank you.
You must log in or register to reply here.